12 special beers that will add sparkle to your season

12 special beers that will add sparkle to your season 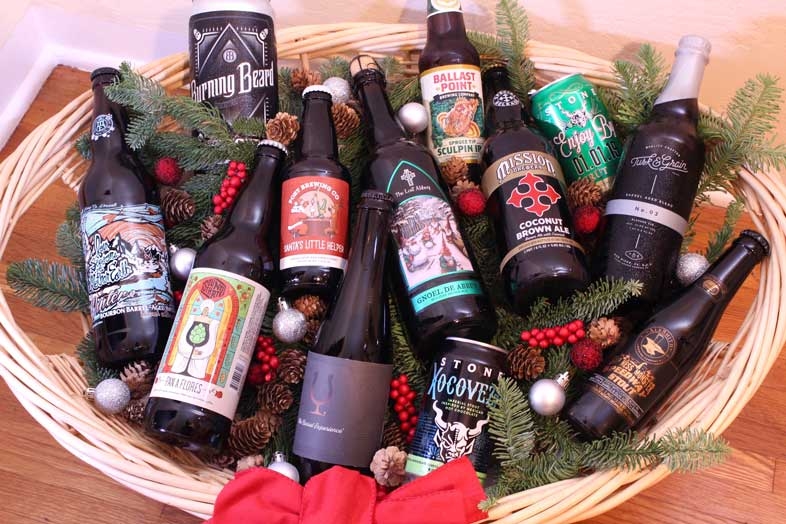 One of the best things about the holidays is that they inspire our brewers to make beers that help us celebrate. For many breweries, this season is an opportunity to create “comfort” brews that evoke cozy houses, twinkling lights, and toasty fires in the fireplace. It’s the time of year when brewers incorporate spices like cinnamon, nutmeg, and vanilla, and utilize the rich, warming characteristics of bourbon, scotch, and whiskey barrels to impart layers of depth and complexity. Lots of these beers—many of which are imperial versions of stouts and porters—can get hefty on the ABV side, but no worries; these bottles are meant to be shared at gatherings of your favorite people, so spread the cheer!

This year, I’ve assembled a dozen beers that I feel are especially well suited to the holiday season. Most of them were created a while ago and released recently, specifically with the holidays in mind. A few are special beers that—while not specifically labeled “holiday releases”—are perfect for wintertime festivities of all kinds.

The majority of my selections fall into one or two categories: beers that are probably best tasted on their own—as a pre-dessert or post-dessert treat, perhaps—or beers that work on their own but will also pair perfectly with a range of holiday foods. All of them are available at their brewery of origin, and most can be found at premium bottle shops. A few can even be nabbed at Vons, Ralph’s, Sprouts, or Trader Joe’s.

Gnoel de Abbey (The Lost Abbey): This holiday brown ale (8.5 percent ABV) is an enticing mix of aromas and flavors that include coffee, chocolate, vanilla, toffee, and caramel. The beer is fairly light bodied, which suits it well to food, but it’s packed with flavor. Roast pork would be a perfect pairing, but Gnoel will work well with other roasts, sweet potatoes, and desserts like chocolate cake, crème caramel, and tiramisu.

Spruce Tip Sculpin (Ballast Point Brewing): How can you not love a holiday beer made with spruce tips? This version of Sculpin IPA (7 percent ABV) is brewed with actual spruce tips that impart a little more pine than the regular version, but also add a sweet spruce character, which I did not expect. (I was assuming spruce tips would be very piney and a bit more bitter.) There are big aromas of lemon, grapefruit, and tropical fruit, with lovely citrus and pine flavors, a hint of honey, and an impressively fat mouthfeel. With its medium-bitter finish and excellent balance, this beer will pair well with cheesy soups, fondues, ham roast, duck, or goose, or even a mincemeat pie. Paired with dessert, Spruce Tip Sculpin will shine alongside caramel bread pudding, cheesecake, or any number of glazed, syrup-soaked cakes.

Mission Coconut Brown Ale (Mission Brewery): This beer, which is fairly light in body, showcases a restrained mix of toasted coconut, coffee, and a hint of caramel. At 5.8 percent ABV, it’s one of the more sessionable dark ales around, which also makes it well suited to food pairings. The coconut elements would fit nicely with any Thai-inspired dishes, Indian curries, or spicy shrimp or fish dishes. If you need a lighter quaff for breakfast on Christmas morning, this beer will be a friend to your pancakes, waffles, or French toast.

Panic at the Monastery (Burning Beard Brewing Company): Big, bold Belgian character with gobs of crème caramel, vanilla, and bubblegum notes, this malt-forward beer also offers hints of spices like cardamom and nutmeg. For all its complexity and depth of flavor, this quad-style brew (10.5 percent ABV) manages to be relatively light bodied; it’s somewhat sweet, but not cloying, and it’s perfectly balanced. Wonderful on its own, Panic at the Monastery would be great with pork (pork belly!), sausage, or roasted duck. If you want to serve it with dessert, keep the food fairly simple (holiday sugar cookies, cream puffs, crème brûlée, cinnamon donuts) so the beer’s flavors can shine.

Enjoy By 1.1.19 Brüt IPA (Stone Brewing): Tired of the same old Champagne toast for New Year’s? How about raising a glass with a brut IPA instead? Stone has released their first version of this super-hot style for the holidays (9.25 percent ABV), and—in keeping with Stone tradition—it’s a big-bodied, highly aromatic beer that sings with flavors of citrus, pine, peach, and grapefruit. Perfectly dry on the finish, Enjoy By will do anything a Champagne can do for food. Though it’s great with cheeses, pâté, and caviar, I’d also enlist it as a foil for sweet desserts, such as lemon or fruit tart, caramels, peanut brittle, and—yes—even fruitcake!

Pan a Flores (SouthNorte): Sipping this wonderful porter, brewed with cajeta, cinnamon, Oaxacan coffee, and Mexican chocolate, is like wrapping yourself in a soft blanket by the fire pit. Dense aromas of cinnamon, vanilla, and nutmeg fill the glass, while rich flavors of chocolate, coffee, and cajeta round out this impressively medium-bodied beer (7 percent ABV). Complex and satisfying on its own, Pan a Flores will also enhance desserts, such as pound cake, churros, eclairs, and apple pie.

S’mores Stout (Second Chance Beer Co.): This imperial oatmeal stout is labeled “Journey #1” in Second Chance’s brand new Barrel Experience series. Brewed with cocoa nibs, vanilla beans, graham crackers, and cinnamon sticks, the beer (10.5 percent ABV) was aged 22 months in bourbon barrels. This decadently delicious stout is a dessert in itself, but it wouldn’t be a crime to pair it with a selection of chocolates, some simple cookies, or vanilla, chocolate, or coffee ice cream. S’mores stout launches on December 15 at both tasting room locations with a limit of one bottle per person. Quantities are limited (40 bottles at each Second Chance location), so get ’em while they last.

Tusk & Grain No.3 Barrel Aged Blend (St. Archer Brewing Co.): The Tusk & Grain program is all about barrel aging, and the numbered series is all about blending barrel-aged beers. The No.3 blends barleywine-style ale with imperial porter and an imperial stout, all aged in Kentucky bourbon barrels and rested for 12 months before being blended with fresh export stout. The result is a rich and complex symphony of malty, chocolatey, boozy flavors and aromas that make this beer über satisfying to sip on its own. At 12 percent ABV, it’s a great after-dinner drink, but it will also shine alongside simple desserts, such as ginger snaps, butter cookies, cannoli, or ladyfingers.

Sap Ness Monster Speedway Stout (AleSmith Brewing Company): As great as Speedway Stout is, the folks at AleSmith are always finding ways to make it even more amazing. This “monster” version of the imperial stout with coffee was aged in maple syrup barrels and Islay Scotch barrels to create a bold, concentrated mix of flavors that is nothing short of exhilarating. At 13 percent ABV, it’s not for the faint of heart, but after one sip, malt-loving fans of big, barrel-aged beers will surely be convinced that their holiday wishes have come true.