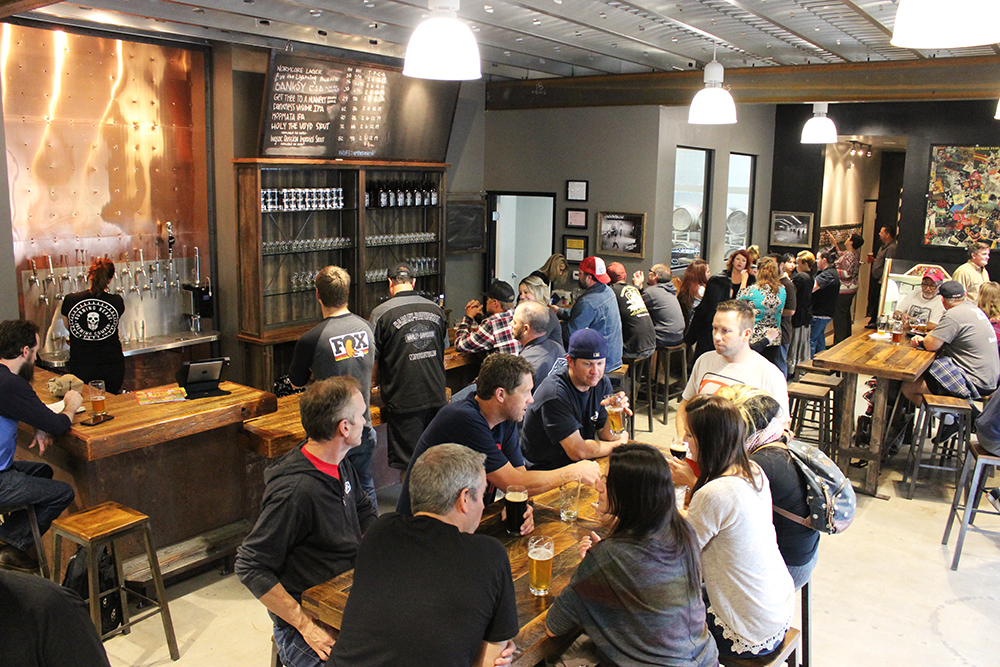 What are the best craft breweries in San Diego County? I get asked that all the time. When people pose that question, it’s usually because they’re visiting, so I tailor my response around the types of beers they enjoy, where they’re staying, if they have transportation, etc. But when I take stock for the purposes of an end-of-year article, I impose a different set of criteria. I begin by removing Big Beer-owned interests (it’s simply a different playing field, monetarily, than independent operations), then examine the make-up and, foremost, the overall quality of each brewery’s portfolio of beers. Is this the perfect formula? Probably not, but now you know where I’m coming from. Will my list match yours? Probably not, but that’s OK! Let us know your list in the comments. The wonderful truth is that there are many outstanding breweries in San Diego County, and a list of 15 only scratches the top layer of foam.

Alpine Beer Co. | Alpine: A small brewery in an unincorporated town on the fringe of our county didn’t become a nationally respected cult-favorite by accident. This house built by hops continues to churn out largely hoppy stock worthy of coveting. More impressive, it’s keeping its street cred intact post-acquisition, something only good beer can accomplish.

Bagby Beer Co. | Oceanside: The sheer volume of beer produced and consistently on-tap is impressive, but the fact all of it is so traditionally to-spec and worthy of praise (as proven by an always-growing collection of Great American Beer Festival medals) is rather incredible. No place spends more time making unsexy styles utterly desirable.

Pizza Port | Bressi Ranch, Carlsbad, Ocean Beach & Solana Beach: To have one brewpub pumping out high quality beers across styles like any of Pizza Port’s do would be a big deal. To have four in a single county (plus another in San Clemente) and remain consistent year in and year out for the better part of three decades is the basis for legend status.

Port Brewing / The Lost Abbey / The Hop Concept | San Marcos & Cardiff by the Sea: No local tasting room offers as many expertly executed and variedly challenging beers as this triple-threat simultaneously focusing on West Coast IPAs, Belgian-inspired ales and barrel-aged everything. Even the occasional bottling hiccup barely detracts from feats accomplished here on an everyday basis.

Societe Brewing | Kearny Mesa: Batch-to-batch consistency across varied ales and lagers—hoppy, session, Belgians, stouts—and an expert level of balance and drinkability that even extends to wine-barrel-aged offerings keeps beer fans and brewers alike coming back to this living tribute to the quality and community of the San Diego beer scene. Disclaimer: I work for this company.

AleSmith Brewing | Miramar: From English session beers to high-octane Belgian, Scotch and coffee-infused juggernauts, this veteran continues to make flawless time-tested beers, but recent additions have been a mixed bag. A new pilsner is spectacular, a gimmick Mexican lager is blah, an extract orange pale is disappointing and the flagship IPA could use a youthful sibling.

Fall Brewing | North Park: The brewing team has experienced more than its fair share of fluctuation over the years, but through it all, its recipes and process remain sound. Stop in anytime, order a beer and you’re bound to encounter something both flavorful and refreshing, registering somewhere between very good and where-you-been-all-my-life status.

New English Brewing Company | Sorrento Valley: Consistently one of the most underrated local breweries, this one knocks it out of the park on the English ale front. That’s to be expected, but New World IPAs, the occasional Belgian beer and barrel-aged beers taste lovely. They have the best cask beer in town, too. (But, personally, I’d lose the Blueberry Blonde.)

North Park Beer Co. | North Park: Captivating the masses with largely session, internationally-inspired beers can be hard to do in the county’s hipster capital, but it’s been accomplished in spades at this two-story hub for members of the Finer Things Club. Consistency is up in Year Two and it’s been nice to see chances taken with occasional collaborative creations.

Second Chance Beer Co. | Carmel Mountain & North Park: Not a lot is flashy about this company’s beers, and not because of stringent traditionalism. They actually tend to veer slightly away from the norm. It would seem balance is the brewmaster’s chief aim, and he achieves it big-time as proven by devout patronage and big beer-competition wins.

Benchmark Brewing | Grantville & Bay Park: This place is all about “beer-flavored beer,” and if that’s what you prefer—straightforward ales made for everyday drinking—you’ll seldom be disappointed here. It would be nice to see new beers come along more often, but limited focus has led to arguably the best table beer, brown ale and oatmeal stout in town.

Burning Beard Brewing | El Cajon: A blending of punk-rock bravado and respect for the classics has resulted in a unique brewery offering delicious beers both New and Old World in nature. There are plenty of hop-heavy numbers to choose from, but Belgian-style ales and a crowd-favorite pilsner diversify this company’s offerings and cement its cut-above reputation.

Eppig Brewing | North Park: The lagers produced at this Brewery Igniter standout are of the highest grade. They make up only one third of the beers on the board, sharing space with IPAs, kettle sours and a rogue’s gallery of outliers. All are enjoyable even if some have room for improvement, but this business is just one year old and well ahead of the game.

Karl Strauss Brewing | Pacific Beach, 4S Ranch, Carlsbad, La Jolla & Little Italy: Many regions have elder-statesman fixtures like this. They’re old, boring and averse to change. This business is not. It actively works to remain current and relevant, and has succeeded at that. Its brewpubs produce creations of varied quality, but their overall track record is impressive.

Rip Current Brewing | San Marcos & North Park: This company’s love of seemingly all of the world’s beers (despite trendiness or marketability) makes for one of the most diverse beer boards in San Diego. Batch-to-batch consistency suffers sometimes, but they regularly do right by locales and artisanal heritages seldom celebrated by others in the local beer community.

Author’s Note: Breweries in each tier are presented alphabetically.