A list of San Diego beers brewed with fresh hops

A list of San Diego beers brewed with fresh hops 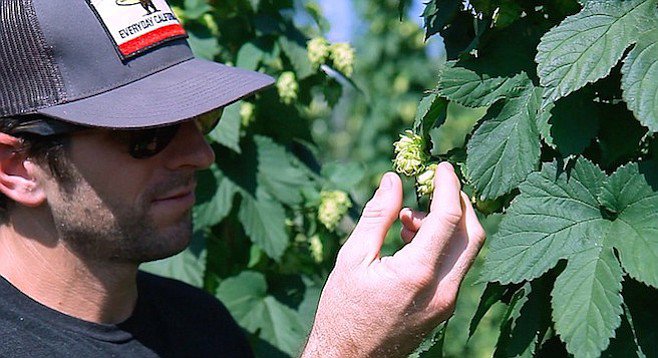 The availability of locally farmed hops is still relatively new, but the volume of hops has been on the rise the past couple years, and so has the number of San Diego breweries using them. No fewer than 24 breweries made wet-hop beers this year, many for the first time. Several brewers actually visited farms to harvest the hops themselves.

Pure Project, for example. Inspired by the chance to source locally, the first-year brewery made an all-California IPA called Everyday California. It’s made from California-grown grain, yeast propagated by its Miramar neighbor White Labs, and hops the Pure Project team picked at SD Golden Hop Farm in Fallbrook.

Fallbrook Brewing also found a way to celebrate the local-ness of its wet-hop beer. The Fallbrook Homegrown extra pale ale marks the brewery’s third anniversary, and brewmaster Chuck McLaughlin invited fellow Fallbrook High School alums to collaborate on the beer — all of them professional brewers in California.

One of these was Coronado Brewing head brewer Ryan Brooks, who also made Fresh Hopportunity pale ale for his employer. He says he tried shipping fresh hops from Washington a few years back, and logistical issues kept him from trying it again. This year’s effort convinced him local is worth it. From now on, he says, “We’re only going to do it from local farms, and we’re going to pick it ourselves.”

Some brewers use their fresh hops for existing recipes, producing wet-hopped versions of their usual offerings. Fall Brewing has made wet-hop versions of its Magic Hat IPA, for example, and Duck Foot Brewing made a limited batch of wet hop Contender IPA.

Recently opened El Cajon brewery Burning Beard made a wet-hop take on its Circle of Hops pale ale. Cofounders Jeff Wiederkehr and Mike Maass were homebrewers until this year and had a little experience using fresh hops. However, Wiederkehr says, “Using wet hops on this scale was new for us. For me personally, these were the freshest hops I have ever worked with.”

Burning Beard got hops from Star B Ranch in Ramona. ChuckAlek Independent Brewersalso operates out of Ramona, so this isn’t the first time head brewer Grant Fraley has sourced hops from his neighbor. “We have been working with fresh hops since our first year in business,” he says. He’s played around with many styles, and this year made wet-hopped versions of Garten Variety IPA and Foreman bitter, and came up with a new recipe he simply calls Fresh Hop saison.

Here’s a list of 30 wet-hop beers in limited release this month. If you know of others, please add them in the comments section.