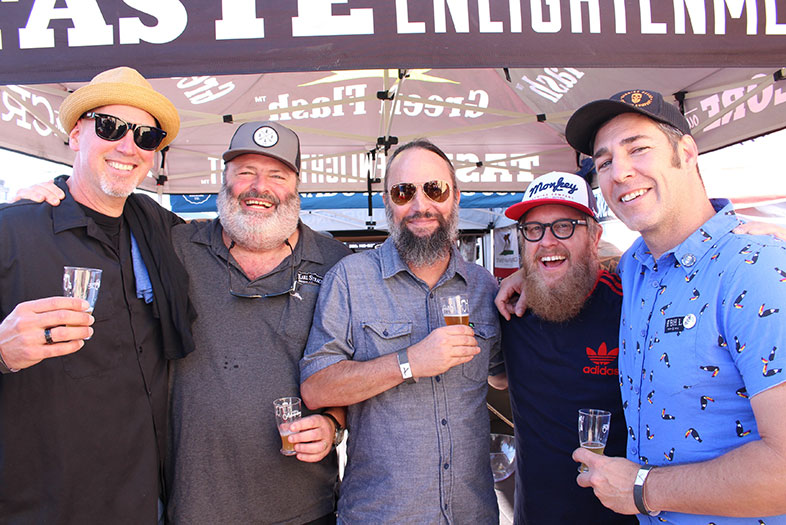 The events, trends, and brews that made the year in beer •
San Diego Magazine, January 4, 2018
By Bruce Glassman

At the end of December, when I take that annual look back over the past twelve months, I realize that every year has something of its own personality. I say “something” because every year also has a lot in common with every other; more breweries open up, more great beer is made, our county gains in notoriety and esteem, and craft beer becomes an ever-more entrenched part of life in San Diego. A big shout-out goes to East County this year, for its noticeable improvements in the brewery and beer-tasting categories. East County really came to life in 2017, with a critical mass that now demands to be taken seriously by San Diego beer fans. On Chula Vista’s Third Street alone we saw two new breweries open up (Three Punk Ales and Chula Vista Brewing) as well as a Groundswell tasting room. These folks joined a growing collection of fellow East County beer luminaries that include Burning Beard, Finest Made, Groundswell Santee, Pacific Islander, Fourpenny, and NOVO Brazil. All this growth, of course, makes me wonder: Is East County the next Beeramar?

“I wonder: Is East County the next Beeramar?”

What most characterized this particular past year—in my personal experience—was a growing sense that the business of beer in our town is becoming noticeably more competitive, more high pressure, and more politicized; in other words, it’s becoming more like every other real industry where there’s lots of money to be made. This is not to say that the characteristic friendly competition and “camaraderie” of the old days are gone, but the sheer number of breweries inhabiting the San Diego space—with brewers from all backgrounds and experience—makes it impossible for all the brewers to know each other, to have tasted each other’s beer, or even to be able to help each other in most instances. I remember when there were 35 breweries in San Diego—you could hold a full San Diego Brewers Guild meeting in the old AleSmith tasting room (now Mikkeller) and all the brewery owners would be there—but now, alas, with nearly 160, it’s hard to maintain that same “small-town dynamic.” That’s not just math, it’s also human nature.

All that being said, 2017 was notable for the high level of collaboration that went on among our brewers. Consumers love tasting collaborations, and brewers love doing them, but these kinds of beers seemed to be more pervasive this year than before. There were dozens of truly delicious collabs I tasted in 2017, but the highlight was clearly Collabapalooza, which was organized and hosted by Karl Strauss Brewing Company during Beer Week. That event included more than 30 local independent breweries and offered upwards of 70 beers, the vast majority of which were highly creative, interesting, and very delicious one-offs that may never again find their way into a pint glass.

Other especially great events of 2017 included the Home Brew Mart 25th Anniversary celebration in Linda Vista where Ballast Point/HBM alums created a series of awesome collaborations and Ballast Point put more than a dozen epic beers on tap, including a Barley Wine from 1997 and a BBA Imperial Brown called Tongue Monster, which was a mind-blower. The Stone 21st Anniversary Party was another standout; that fantastic event hosted more than 60 great breweries from all over the country and featured some of the best craft brews America has to offer. (My mouth still waters when I recall the taste of The Bruery’s Mash & Coconut Imperial Brown Ale Aged in Bourbon Barrels.) Rhythm & Brews in Vista was another super event that showcased dozens of San Diego’s best beers, and the Council 3rd Anniversary fest provided guests with an exceptional selection of more than 50 sours and barrel aged beers. I like celebrating with those folks!

A number of the year’s best events were also specifically about helping others. The Pink Boots Society, which is dedicated to furthering the education and inclusion of women in the brewing industry, celebrated its tenth anniversary with a wonderful beer fest in Liberty Station, and Beer to the Rescue—which raises money for the Lupus Foundation of Southern California—organized a month’s worth of great beer events that involved dozens of local breweries, pubs, and craft-centric businesses. This year BTTR surpassed a grand total of $100,000 raised so far for the Lupus Foundation. I’ll definitely drink to that.

Other memorable beer events—ones that matched great beers with great food—also provided a delicious twist to 2017. I must have attended more than twenty beer dinners and pairing events, and all of them featured wonderful menus, but few pairings rivaled Chef Aarti Sanghavi’s Lemon Verbena Chutney Crusted Spot Prawn served with Bitter Brothers Spring Fling Saison at their Summer Dinner in July; or Chef Rich Sweeney’s Braised Pork with Crispy Yucca and Mole served with The Savage at Societe’s 5th Anniversary; or Chef Brad Wise’s Duck Dog with Pine Needle Glaze paired at the SDBW Beer Garden with Torreyana Saison from Thunderhawk Alements.

If I had to characterize the past year in terms of the most influential beer style, I’d have to say 2017 was the year of the Mexican lager. All styles and variations of lagers exploded in popularity last year, but the Mexican lager, with its slightly maltier notes and hints of corn flakes and toast, became the “it” beer that everyone asked for all over town. Many brewers produced wonderful beers in this style, but many only had their lagers available on draft at their tasting room or at specialty accounts. A few, such as Mason Ale Works, Thorn, and AleSmith heeded the pleas of their fans and put their Mexican lagers into cans so they could be available on a larger scale throughout the county. Gracias to them.

Finally, there were the specific beers that stood out from the crowd and remain the most memorable beers of 2017. A truly comprehensive list would be nearly impossible to compile, but there are certain beers that made a lasting impression on me for their daring, their creativity, their depth of flavor, and the sheer beauty of their execution. Here’s my list of 2017’s most memorable beers, in no particular order:

Those beers are going to be hard to beat in 2018, but you’ll be pleased to know that I’m willing to put in the work to see which new brews rise to their level. That’ll be part of what will make my New Year so great!