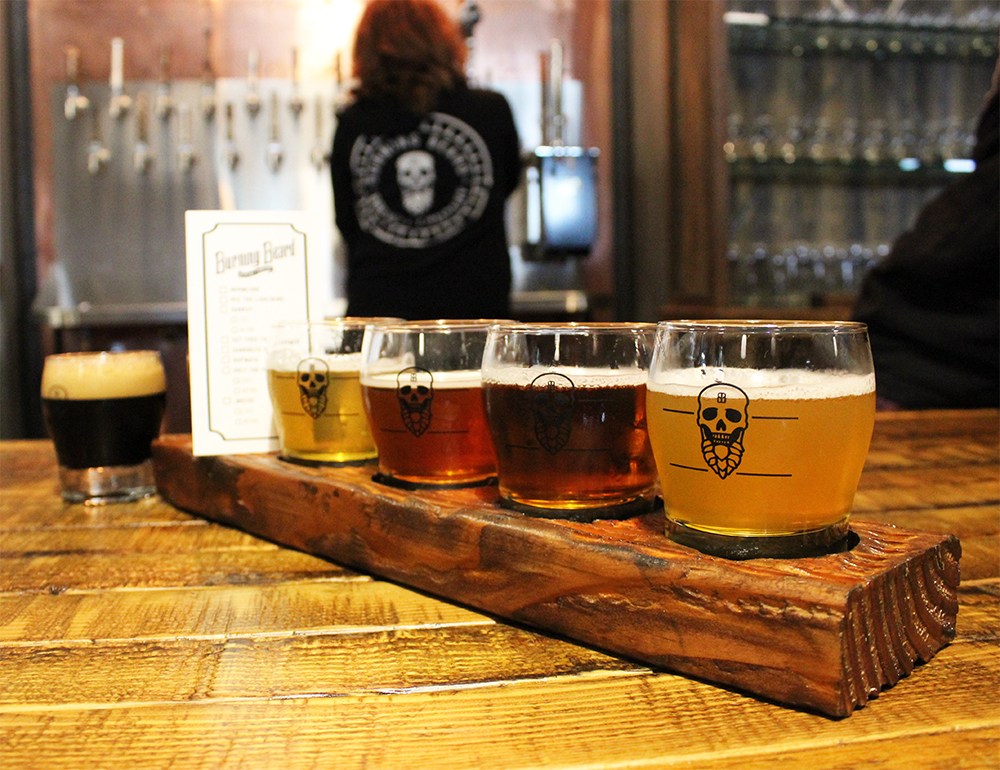 Standing across the street from Burning Beard Brewing Company (785 Vernon Way, El Cajon), I could hear two things crystal-clear—the low drone of punk-rock music and a bartender enthusiastically explaining one of the beers. I was familiar with and happy to encounter both. After crossing Vernon Way, I headed straight for the bar and said hi to my former AleSmith colleague, Shannon Rogers. Even in a county as beer-crazed as San Diego, there may no one person who extracts as much joy from sharing information and details on artisanal ales and lagers as her, and it was good to see the practice of friendly indoctrination she employed at her former place of work is in play at this new arrival to East County.

As tempting as it was to belly up to the bar, in an effort to remain impartial, I ordered one of each beer on the board then retreated to a corner to dissect the beers without being swayed. Doing so also allowed me a nice view of the tasting room and afforded me the ability to people-watch. And let me tell you, there were a lot of people to watch. The place was packed to capacity, including the small amount of drinking space just outside the entrance. Not bad for a Thursday less than two weeks into the brewery’s young-life.

The space itself is a bit minimalist, but that’s not to say it isn’t attractive. With a jukebox in one corner, a stylish bar area and a pair of cool custom-built tables outfitted with circa-1890 gears from a Julian gold-mine pump, it’s nicely appointed. Ample seating and a wealth of table-top space are other big pluses, and the simple black-and-white logo components decorating the interior and exterior punch things up, melding with the guitar-heavy music to communicate the rock-and-roll nature of the business.

In listing the best beers up for grabs at Burning Beard, I’ll start out with a rarity of sorts, a proper local Pilsner. There are others, but this is a fairly underrepresented style—odd for a consistently sunny region such as ours. Normcore Lager is clean and light on the palate. While it could have a sharper bite on the finish, the fact that it doesn’t will probably work well for ownership. Although I don’t have numbers to back it up, I have a suspicion that more macro-lagers are consumed in the sometimes-scorching East County than elsewhere in San Diego, so this slightly tamer take on a Pilsner will have the potential to convert fans of Bud and Coors Light to the wares of their new local brewery.

The best beer of the day was Hopmata, a 7% alcohol-by-volume (ABV) India pale ale (IPA) with robust aromas of pineapple and passion fruit. The balance is fantastic and it’s just bitter enough to keep this crushable beer from heading into wreckable territory. It made me wish I’d had the chance to taste Burning Beard’s other IPA, Dankness Visible, but it had sold out (it’s now back on tap). Holy the Voyd was the best of the dark beers, erupting like a coffee volcano on the nose before matching up with big java flavors from locally sourced Dark Horse Coffee Roasters. Rye the Lightning is a great modern, SoCal session pale ale (4.6% ABV) that’s straw-colored, unbelievably light in body but packed with hop potency and rye spiciness. Banksy ESB has a nutty bouquet and a touch of West Coast hoppiness on the finish that is welcome from this sometimes dull English beer style.

The only beers I wasn’t particularly impressed with were Ingsoc, a Russian imperial stout that was designed to taste of dark chocolate but came across a bit astringent in the finish; sort of like a black IPA. It’s still a good beer, but I’d reach for Holy the Voyd over this nine times out of ten. And though another in my party whole-heartedly disagreed, the best-named beer of the bunch, Get Thee to a Nunnery, was my least-favorite brew. Billed as a Belgian-style table beer (or singel, per the Belgian Trappist hierarchy), I’d never have pinned it for one and felt it was too grainy with not enough of the floral, ester qualities I look for in this style. I have to say, it was nice to visit a brand-new brewery where the only knock I had was questionably a matter of taste.

The owners of Burning Beard, which includes homebrew club QUAFF’s 2015 San Diego Homebrewer of the Year Jeff Wiederkehr, hail from El Cajon. Among their top goals is to build community in a community that’s underserved where craft-beer is concerned. According to them, people in El Cajon are ready to have a place for local fermentables, and deserve to have such a place. To those folks, I say “congratulations,” because not only is this one cool and promising spot…Shannon’s tending bar. Bonus!