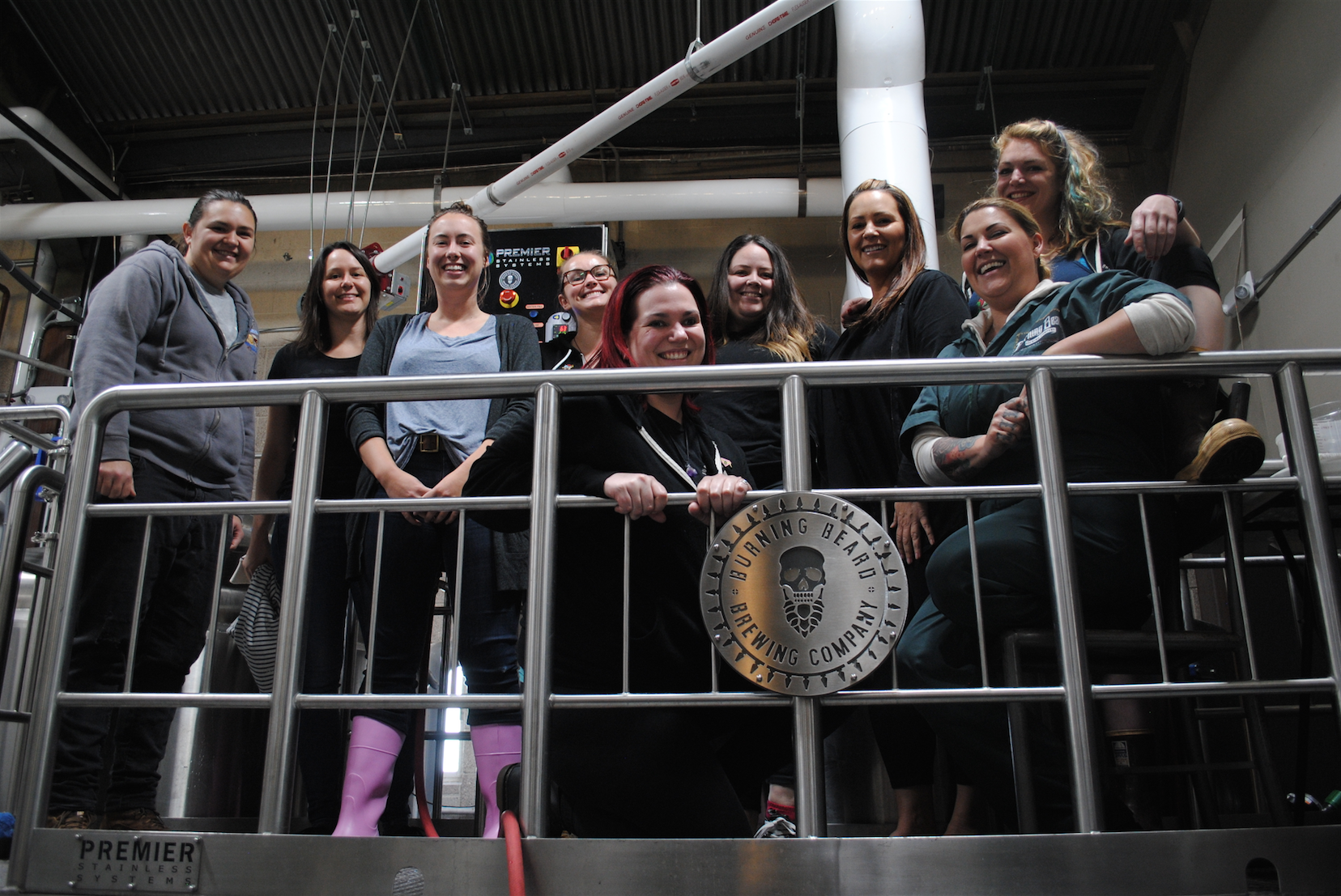 A play in three acts

The curtain opens on a crisp March morning. It is 7am, the sun is rising and the jukebox is set to free play.

It is traditional to start a brew day with food. This morning’s menu consists of two dozen donuts and a strong sense of camaraderie. As our participants arrive, we discuss the beer we will brew: Get Thee to a Nunnery, a Belgian singel brewed with continental malts, EKG, and Belgian candi sugar. After consuming an inhuman amount of donuts, it is time to brew. 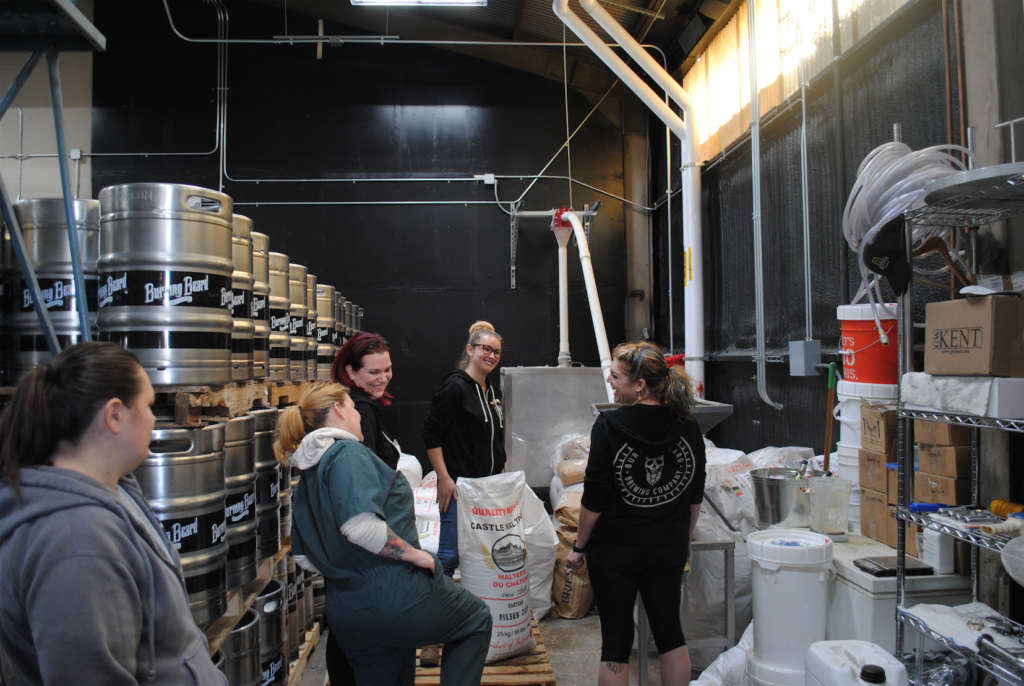 Our cast of characters gathers by the grist mill, where 55lb bags of malt wait for a Ladybeard to hoist them.

The brewing process begins with the grain. In order to more easily access the fermentable sugars trapped inside malts, it is necessary to crush them into grist. Our mill does that for us. After carefully adding the bags into the mill with minimal casualties (some of it ends up down Shannon’s shirt), it is augered into the mash tun and it’s ready to roll. We mash in and have time to spare while those fermentable sugars are released.

On Burning Beard’s 15 bbl brewhouse, we discuss the history of women in beer. It all started in ancient Mesopotamia, the utopian society where every citizen only consumed beer (what a way to live). The conversation moves to Ninkasi, the patron goddess of beer. The fact that Ninkasi is female correlates to the womanly history of beer and its original brewers. In that time, women were the majority of the brewers, or “brewsters,” who would provide bread and beer to their households. It wasn’t until beer was commercially brewed that this paradigm shifted. Once the mash is finished, it is time to lauter. 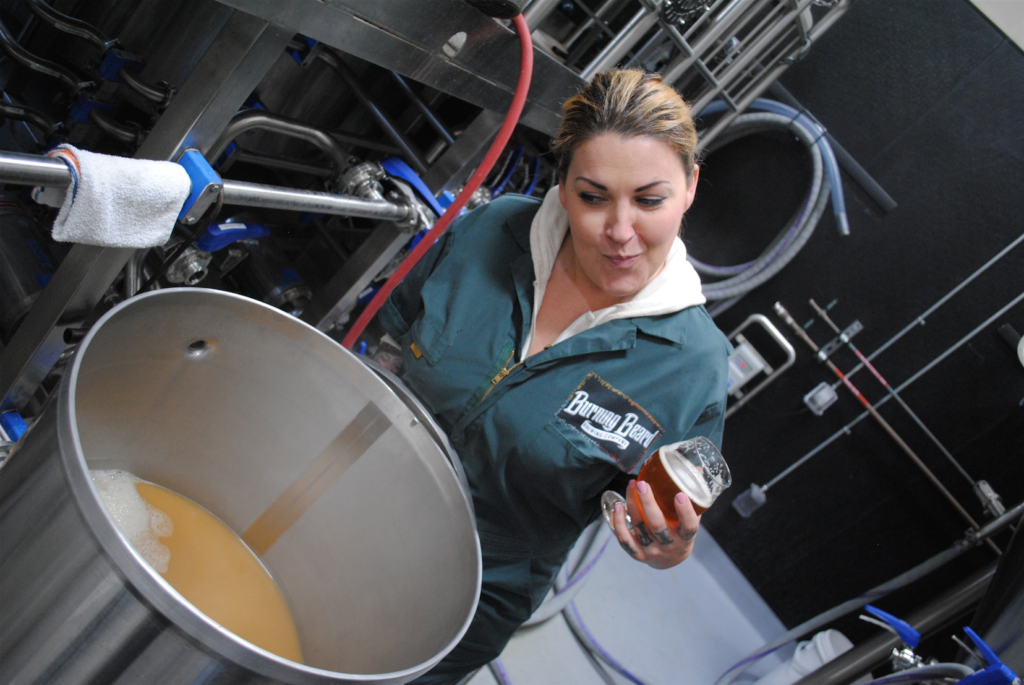 We each take a turn peering into the mash/lauter tun as the rakes churn through the mash. We create a grain bed, or a layer of pressure on top of the mash that forces the sweet wort to separate from the spent grain. Once this is achieved, the wort is transferred into the boil kettle. Boiling the wort sanitizes the mixture and readies it for hop additions, of which we do two. The boil takes some time, so we retreat into the tasting room for some impromptu donut and beer pairings. 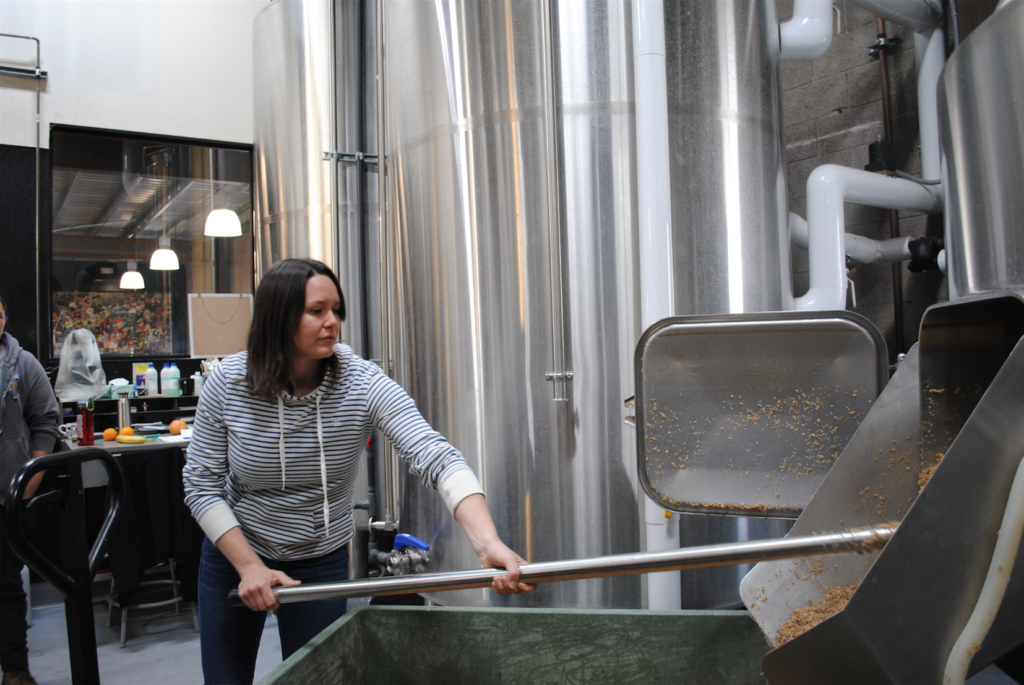 The boil is rolling, the Belgian candi sugar has been added, the donuts are almost gone.

Armed with a rubber hoe, we all help move the spent grain out of the mash/lauter tun and into a tote so local farmers can pick it up. We’ve done our hop additions, monitored our temperatures carefully, and are coming closer to the end of the brew. The wort, now hopped and sanitized, is transferred into one of our fermenters, where the Belgian yeast will consume the sugars and give off CO2 and delicious ethanol over the course of the upcoming weeks. 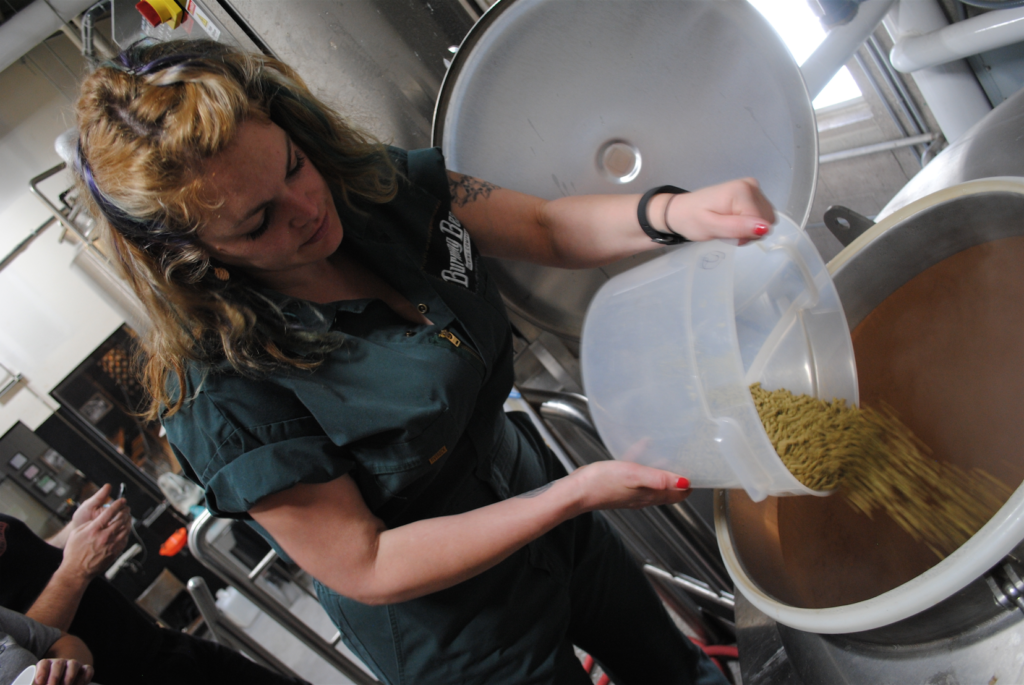 It is a day of togetherness, laughter, bad jokes, and donuts. The Big Boots Brew Day provides a unique opportunity to open the doors of Burning Beard and invite the female beer community inside. Over the course of one day we brew beer, forge new friendships, and feel a sense of empowerment.

Our special batch of Get Thee to a Nunnery will be served at Burning Beard’s 1-Year Anniversary party on Saturday, April 1, 2017. The Ladybeards—along with Alex, Brian, Mike, and Jeff—can’t wait to share it with you.