Brewing Suns Rising in the East

Brewing Suns Rising in the East 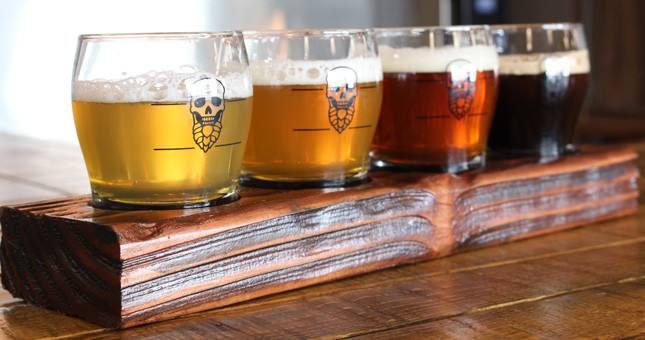 Since the mid 1990s, San Diego County has seen exponential growth in the number of its breweries and is very close to being able to say it is home to nearly 130 breweries! A great deal of that recent growth has come in regions – both north and south – that are near the coast or within 15-20 miles of the coast. Some savvy brewers have looked at the geography of that growth and have realized there’s great opportunity in heading east. For one thing, the playing field is far less crowded right now.

Getting to East County from anywhere in the county is not hard once you’re on the Interstate 8. Here’s an eastern loop that starts in the Hotel Circle area of Mission Valley and will take you through El Cajon, Alpine, Julian, Ramona, and Santee. If you want to do the full loop, you’ll need the entire day, but you could also break it into just the northern breweries (Ramona and Julian) or just the southern breweries (Santee, Alpine, and El Cajon). You might also want to consider booking a brewery tour that will chauffeur you around while you enjoy a few samples at each stop.

You’ll find that most folks in east county are distinctly non “surfer dudes.” These towns tend to show off another side of California, one that celebrates agriculture, the Old West, and the true-blue American pioneer mentality of fierce independence.

From the Hotel Circle area, a half-hour drive east on Interstate 8 lands you smack in the middle of Alpine. It’s a charming little town, unassuming, quiet, and happy to stay that way. On the main drag, you’ll find Alpine Beer Company, which is also simple and unassuming – except for its beers, which are some of the best in San Diego. Founder Pat McIlhenney, who’s been brewing at this location since 2002, has gained quite a cult following, especially from hop-heads who adore Alpine’s many hoppy brews. There’s plenty for non-hop-lovers to choose from, but – if you’re a hopster – don’t miss the Nelson Rye IPA, Duet IPA, or Pure Hoppiness IPA.

From Alpine, head east on Interstate 8 and take the California 79 until you hit the scenic old mining town of Julian. On the eastern outskirts of Main Street, you’ll find Nickel Brewing Co. A small wooden “cabin’ style building houses a rustic but charming tasting room where brewer/owner Tom Nickel offers up his hand-crafted beers. Tom has long been a player in the San Diego craft beer scene, and his beer knowledge runs deep. In Julian, he mostly brews what he likes to drink, which tends to be hoppy pale ales and IPAs along with some stouts and malty beers. He’ll also play around with a few fun ingredients and flavor combinations, most notable of which is his Apple Pie Ale, a beer that smells of cinnamon, nutmeg, and allspice and pays homage to Julian’s world famous apple pies.

At the other end of Julian’s main drag, just minutes away from Nickel Brewing, is Julian Brewing Company. Conveniently located inside the Bailey BBQ restaurant, this stop provides delicious craft beer and great barbecue, all done on the premises. Revived and re-opened by Vince Marsaglia, co-founder of San Diego’s super successful Pizza Port brewpubs, the folks here know a thing or two about beer and food. The house-made beer list is usually limited to 6 or 7 choices, but they’re all good. Belgian-style fans will be especially happy with the Farmhouse Saison, and hop lover’s will not be disappointed by the IPA.

From Julian, you’ll descend a few thousand feet from the mountains and head west as you travel along #78 into the town of Ramona. Here, on Main Street, you’ll find a small tasting room nestled between a meat market and other mini mall storefronts. As Ramona’s only brewery, ChuckAlek has planted the first flag in town and has distinguished itself as a true brewing pioneer. Many of ChuckAlek’s beers are both ambitious and unusual. Brewer/owner Grant Fraley is fond of doing his take on “old” styles such as his altbier and brown porter, along with some truly unique brews, such as his La Cappellana ale, which is made with the 100% brettanomyces yeast.

From Ramona, it’s a straight shot south on #67 to the town of Santee, which is now home to three breweries. The first brewery you’ll encounter is the relatively new BNS, which opened its doors in June 2013. A nice outdoor patio leads into the main tasting room, which is adorned with various items of Americana from the Old West. It’s a large, well appointed space, with a separate area that offers homebrewing supplies. Head brewer Dan Jensen brews a relatively small collection of “core” beers, and also offers various special releases and seasonal brews. Lovers of lighter styles will be especially content with the Saloon Girl Saison and the Gunfighter Golden.

About 8 short minutes away from BNS, heading south and a little west, you’ll land at Butcher’s Brewing. This is the cozy, welcoming space that Twisted Manzanita Brewing & Distilling originally inhabited and quickly outgrew, so – as is now commonplace in San Diego – one guy moves out and another guy quickly moves in. Owner and brewer Rey Knight is an experienced brewer with a solid talent for making well-rounded, balanced, and flavorful beers. His lineup usually includes about 10 beers on tap, which range from light and hoppy to dark and malty (which is Rey’s wheelhouse).

You could walk it (about 0.7 miles), or endure a 2-minute drive from Butcher’s Brewing; however you travel, you’ll come upon another mostly commercial business park, not far from the freeway. Housed within this cluster of buildings is a casual, colorful, island-themed brewery called Pacific Islander. Opened in June 2015, it provides a little bit of “Aloha” for an appreciative and thirsty community.

Santee’s beer scene has grown quickly over the past few years, and it’s showing no signs of slowing down. Pacific Islander was the fifth company to begin brewing operations in town (although Twisted Manzanita closed in 2016) and it has been a popular and crowded destination ever since.

The inviting and comfortable space both inside and outside definitely reflects a relaxed and inviting “island” vibe. The outdoor patio is filled with extra wide wooden chairs and benches, and the indoor space has large tables that seat groups instead of couples.

Brewer Will Fox has crafted a small lineup of solid, mostly straightforward beers that include the essential IPAs, but the most successful offerings are the more malt-forward brews, such as the Sunset Red and the Tahitian Brown.

When Burning Beard opened its doors in February of 2016, it officially became El Cajon’s only brewery (URBN St. brewery closed only weeks before). The closing was unfortunate, but not for Burning Beard; El Cajon is a thirsty market, and one that is eager to support a thriving brewery scene.

The large new facility, near the Santee border, that houses the Burning Beard operation is impressive in its size and its overall design. The light, airy tasting room is outfitted with solid, handcrafted wood tables and stools, and is accented by numerous thoughtful and creative design touches (including a very cool Burning Beard-curated juke box).

Founders Mike Maass and Jeff Wiederkehr have elevated their homebrew recipes with help and collaboration from talented head brewer Chris Brown. The beers are all clean and well made, and they all deliver on both the aroma and flavor fronts. The Hopmata and Dankness Visible IPAs are notable for their excellent mouthfeel; the Get Thee to a Nunnery Belgian ale is crisp, clean, and estery; and the Banksy ESB is one of the best I’ve tasted in San Diego.