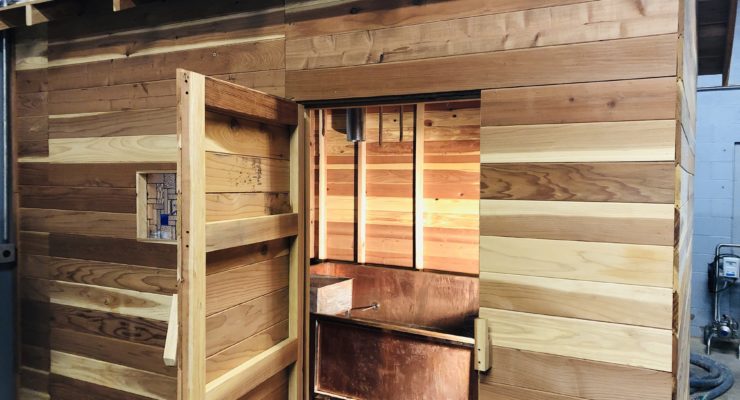 El Cajon’s Burning Beard Brewing is over two-and-a-half years old. The business has accomplished a lot, realizing a broad portfolio of beers ranging from all-the-rage to seldom-seen, establishing a die-hard fan base and getting its beers into distribution. Those were goals founders Mike Maass and Jeff Wiederkehr established at the company’s inception. So, too, was the ability to produce lambic beers the way brewers do in the style’s country of origin, Belgium. It took them a little while to accomplish that, but last night, that dream was realized when Maass and Wiederkehr used their coolship for the first time.

Those unfamiliar with the term may wonder what sort of vehicle this article is referring to, but a coolship is a stationary, shallow, open-topped vessel into which hot wort is funneled so that it may cool while picking up microflora present in the atmosphere. This is a crucial part of lambic brewing and something Burning Beard is capable of since installing a 10-barrel, copper-lined coolship in a separate warehouse abutting—and completely walled-off from—its production facility. That vessel is housed inside a chalet-like wooden structure dubbed the “Beard Fort,” which is equipped with a positive-pressure fan that pulls air into the enclosure during the wort’s time in the coolship.

When asked what inspired such a taxing, involved initiative, Wiederkehr responds, “The entire idea. Simply the Beard Ethos of creativity and the romance of brewing—mostly it is about the romance. We are a romantic bunch.” And about the extra-mile step of building the enclosure that houses their new toy? “To hedge our bets. We literally painted the walls with our house ‘wild’ strain and a few other things we’ve propped up, the idea being that, worst case, our wild strain is in the room playing with whatever funk we pull into the room through the fan. For the record, our wild strain was born of an open-fermentation session in my backyard, so painting our Beard Fort is not cheating the idea of building a San Diego terroir.”

For now, all beers produced using the coolship will have the same 60% pilsner malt and 40% wheat base. Wiederkehr says there isn’t much he and his team are responsible for beyond wort-production. After that, it’s all up to the organisms in the air to inoculate the wort as it sits overnight in the coolship. Hence, they will work to keep the Beard Fort in as natural a state as possible. “This is a very organic process. If your brewery is too clean, you will never make good wild ale,” he says.