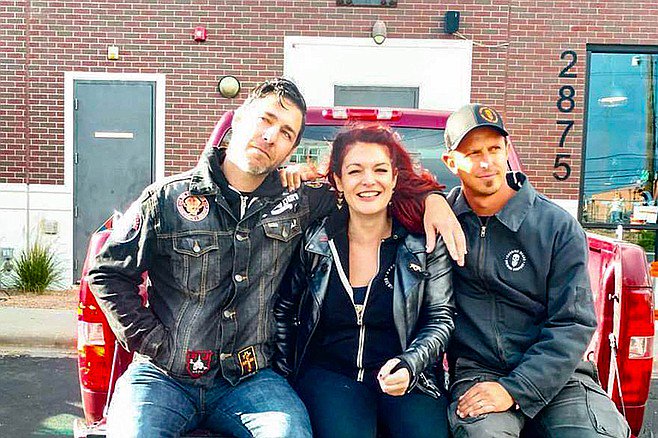 When she first walked in to Burning Beard Brewing Co., Shannon Lynette says she wasn’t there looking for work. But she was between beer industry jobs, mulling a few offers, and contemplating a move back to Colorado. Then someone in her craft beer circle mentioned a small startup brewery that opened in El Cajon with a killer jukebox. Her kind of music. “You know what,” she thought, “I’ll go in, I’ll have a pint, I’ll listen to some Helicopters, I’ll listen to some Social D., and I’ll figure out what I’ll do with my life.”

Now, a little over three years later, Lynette is a part owner of the brewery.

Burning Beard founders Jeff Wiederkehr and Mike Maass announced her ownership share in a blog post lauding Lynette’s passion for craft beer and standout customer service, and noting, “She’s played a huge role in building and developing our team and brand.” To be clear, consistently high beer quality has played a huge role in the brand’s success. But it’s true that, under Lynette’s direction, the brewery’s customer service has in particular been singled out by media and fans as tops in the local industry. Enthusiasm for the beer craft is contagious in Lynette’s tasting room, and it’s what caught Wiederkehr’s attention that day of her first visit, when he observed her animated beer discussion with a fellow customer.

“Her drive, her passion, her rebel spirit,” he recalls, “It was all apparent.” He and Maass realized they had found a charismatic kindred spirit who happened to bring tasting room experience from one of the region’s top breweries. “She would be a perfect fit for what we were building as a brand at Burning Beard,” adds Wiederkehr. Even though she came looking for a bartending gig, they would only hire her to be tasting room manager.

“I always tease them a little about this,” says Lynette with a laugh, by pointing out, “You hired a girl who showed up to a job interview in an Iron Maiden muscle tank and yoga pants!”

Lynette had no inkling it would lead to an ownership position when she took the job, but she relishes small brewery life and embraced multiple roles: organizing events, attending events, marketing, sales, and staffing. “I don’t do anything partially,” she concedes, “My heart’s either in something or it isn’t. So when I accepted it was like, all right it’s go time. Put on a pot of coffee, let’s do this.”

She immediately became involved in ownership meetings, which Burning Beard refers to as the Ministry of Beer. “Mike, Shannon, and I discuss everything we do,” explains Wiederkehr, “what events we want to do, how to do them, what tasting room and brewery applicants we consider, how we educate our employees and customers, to how the beer is tasting, and what beers we are working on in the brewery.”

If it sounds to you as though she’s had a voice in the business from the start, Wiederkehr and Maass agree. Unbeknownst to Lynette, they started discussing how to set up her ownership share back in 2016. Not that ownership of a small three-year-old brewery entails much yet.

“There really isn’t a rush to gain ownership of a company that isn’t paying dividends or isn’t for sale,” jests Wiederkehr. “Whenever we pay a distribution to the ownership group, she gets paid, and if we lose money, she will be able to claim the loss on her taxes.” Lynette still receives her manager paycheck, but the company has yet to profit. Instead, it’s reinvested in developing a wild ale program, planning an on-site restaurant, and chosen to provide health benefits to employees.

And by making Shannon Lynette part owner, they’ve invested in what their blog post calls, “many fruitful years of craft beer badassery together.”