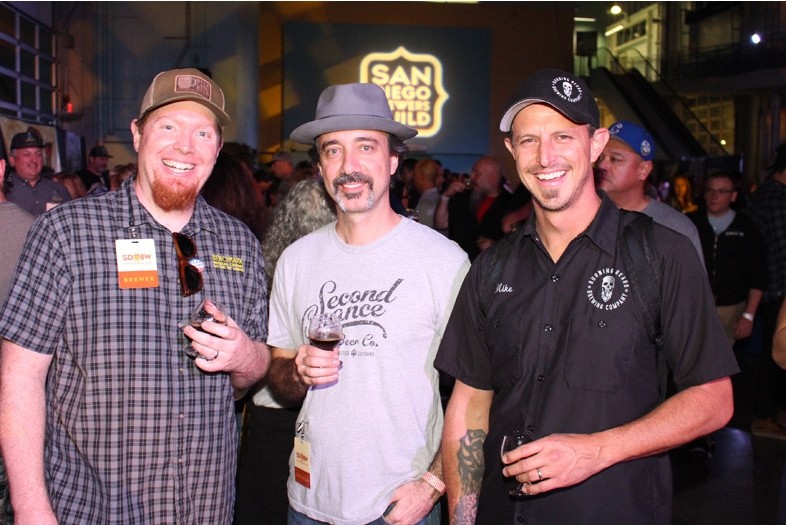 Raise your glass! Last Friday, San Diego Beer Week officially got underway with festivities downtown at Broadway Pier. Friday night was the VIP Brewers Takeover, which filled the indoor space with nearly 70 brewers pouring more than 140 of their specialty beers. On Saturday afternoon, the pier and the indoor space were jam-packed with brewers, attendees, and vendors of all sorts. The weather, as you may imagine, was perfect: A crystal blue sky and temps in the low 80s made conditions optimal for beer-tasting and lovin’ life.

On Saturday afternoon, the fun continued with Beer Week’s signature kick-off event on the pier. A total of 75 breweries poured nearly 200 beers of every conceivable style (and some you might not conceive) that ranged from sours to Berliner Weisses to wheat beers, stouts, and—of course—IPAs. The pier was loaded with great-tasting brews, all of which went down especially well in the early afternoon sun. Although a few “standard” styles impressed me with their excellent balance and flavors—notably Lost Abbey’s always fantastic Red Poppy and Mason Ale Works’ newest juicy IPA called Andrew’s Forest—I felt the biggest winners of the afternoon were the beers that stepped off the beaten path just a bit. Toolbox’s Cucumberliner, a Weiss bier made with freshly peeled cucumbers, was crisp, flavorful, and incredibly refreshing. Pure Project’s La Vie en Rose, a Saison made with hibiscus and honey, was beautifully balanced with aromatics from the hibiscus and just a tiny touch of sweetness that gave it a wonderful mouth feel. Surprise superstar of the day went to Truffle Shuffle Blonde from Monkey Paw. This lightly malty but refreshing beer was subtly infused with the rich flavor of chocolate truffle, which made it both light and decadent at the same time. Surprisingly delicious.

Following is a photo gallery of some of the sights and scenes from the festivities on Friday and Saturday. If you weren’t there, we’re sorry we missed you! Of course, there are still four days of San Diego Beer Week left, so—if you haven’t yet—there’s still time to go out and partake of some of the week’s special offerings. At sdbw.org you’ll find a detailed calendar of events (you can sort by day) that includes everything from beer education classes to beer brunches and dinners to tap takeovers to special pint nights and rare beer releases. And remember, when you get out and drink great local craft beer, you’re also doing your part to support your community! What better way to be a good citizen?