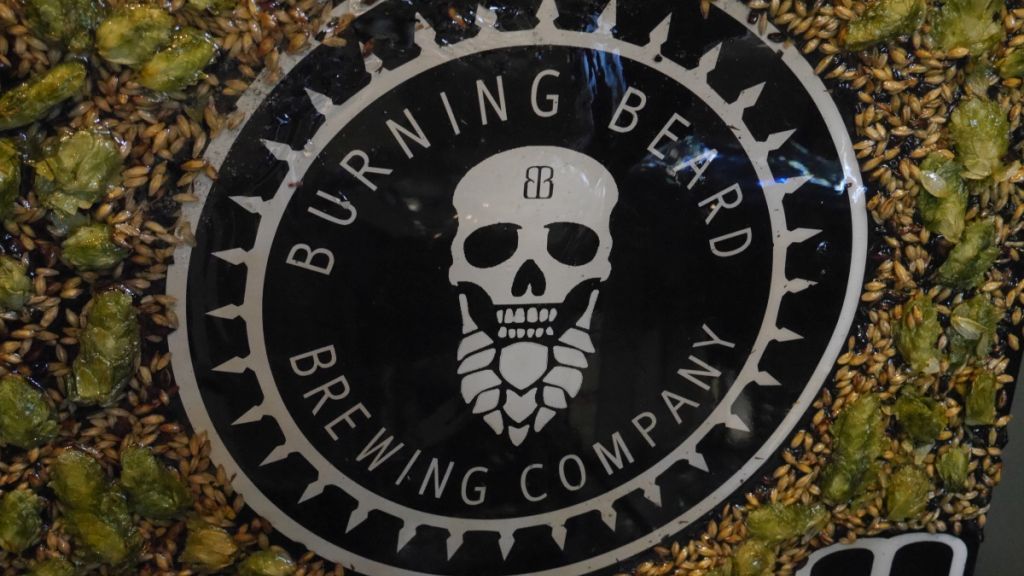 In San Diego most new breweries aren’t going to get very far without an IPA unless they focus exclusively on sours and wild ales. Burning Beard has been open for a few months and has already attracted a large following thanks to a solid lineup of hoppy beers and a punk vibe that comes through in the beer names, the logo, and the music played at the tasting room. Located in a small industrial area just outside the center of El Cajon, and not too far from the 52 freeway, on a busy day you will likely find yourself parking on the street but once inside you are greeted by the smiles of the various beertenders who all know their beers and are led by Shannon Lynnette, whose involvement as tasting room manager instantly signals to her friend and fans that the beers are going to be awesome. Many locals know her from her time at Alesmith.

Side note and disclaimer: I was not charged for the eight tasters that I will discuss in this post thanks to the awesome hospitality of Shannon and the newest member of her team. However, I will be giving them the same treatment as I would any other brewery. I have not been in any way obligated to give them a positive review.

This was actually my second visit to the brewery, after I made the drive out a month earlier only to realize my cold left me unable to smell and thus unable to experience the hops they pull off so well. Though I couldn’t experience their beers that day, trusting Shannon’s recommendations and a super fresh IPA I came home with a crowler (32 ounce can to go) of their Hopmata IPA. A few days later, when my senses had returned, I opened the crowler and posted on Instagram, “Delicious IPA with tangerine notes and super sticky and dank, very impressive IPA.” At the time when I opened the crowler the beer had been only on tap for four days and the freshness was noticeable. Some responded to my post on Facebook and indicated that they preferred the Dankness Visible IPA and I can see why and will explain below now that I have tried it.

On this most recent trip I stuck mostly to the hoppy beers with the exception of the saison and the imperial stout. The coffee stout they have was out at the moment, which was the beer my husband preferred when we stopped by the first time. I tasted the pilsner, rye pale, ESB, Circle of Hops pale ale, saison, Dankness Visible IPA, Hopmata IPA, and Insoc imperial stout. Starting a tasting with a pilsner I have rarely experienced one so flavorful and delicious. To me there are two things that set apart a good pilsner, one is the clean pilsner malt and the other is the right amount of hop character to balance it out. This had both with notes of fruit and floral hops that balanced nicely with the slightly sweet pilsner malts. I later ended up ordering a pint of this beer before I left.

The rye pale was a solid pale with notes of tangerine, lemon, and melon from the hops and a nice mild bitterness on the end. The ESB was super smooth and delicious with a great caramel malt backbone and a light apricot hop flavor that is detectable but stays back to avoid overpowering the rest. There are a handful of local breweries that have impressed me with their ESBs but Burning Beard joins the group. It is no surprise to me that this beer recently won first place at a beer festival. Circle of Hops is the more traditional pale of the bunch, offering a chewy malt backbone and with hops primarily providing bitterness with some dank and sticky character coming in at the end. Of these first four, the pilsner and ESB stood out for me though many people around were really digging the Circle of Hops.

The saison is super fruity with notes of banana, pineapple, and ripe tropical fruit with just a light funk behind it all. The beer had none of the traditional pepper or earthy notes that can sometimes make a saison. Before I describe the two IPAs I should note that the Dankness visible was noticeably the fresher of the two so that gave it an edge at the time. Both IPAs have distinct hop profiles that may appeal to different people. The Dankness Visible is super dank and has lots of pine and resin notes. I really enjoyed the balance of flavors here and the hops were strong and in your face without making the beer too bitter. The Hopmata IPA is more fruity and sticky with notes of mango and tropical fruit and a slight wheat malt flavor to it. This one was a bit more bitter of the two but still a very tasty IPA.

The Insoc imperial stout is primarily bitter and roasty with notes of dark fruit dominating. I tend to prefer more chocolate or coffee notes in my imperial stouts and more sweetness so I wasn’t too big on this. My husband, who also prefers more chocolate and coffee in his stouts wasn’t huge on this one either. It is clearly well made but not the type of stout I would order much of. After tasting my 8 tasterts and sipping on a pint of the pilsner, I was ready to head back home so I picked up a crowler of the Dankness visible to have in a few days. I don’t usually do a lot of growler fills with breweries but I can see myself stopping by when I’m in the area fairly regularly to bring home some of their delicious IPAs. It is nice to see a small brewery offering crowler fills since you don’t have to worry about bringing your growler with you to stop by for beer to go.

I should also note that while I really enjoy Burning Beard, they are most impressive for their hoppy beers. They do have a few tasty Belgian style offerings as well as the stouts and are working on some sours so that eventually they will truly have something for everyone. For a brewery that has been open only a few short months they clearly fill a void for the locals in the area who filled up the place as early as 4PM on a Thursday. The place does have quite an echo so when it is crowded it can be difficult to hear the music under the roar of all the talking but it doesn’t get so loud to make it uncomfortable and they do have a section of outdoor seating if it gets to be a problem. They also regularly have food trucks during the evenings so keep an eye on their Facebook page to see if a food truck interests you.