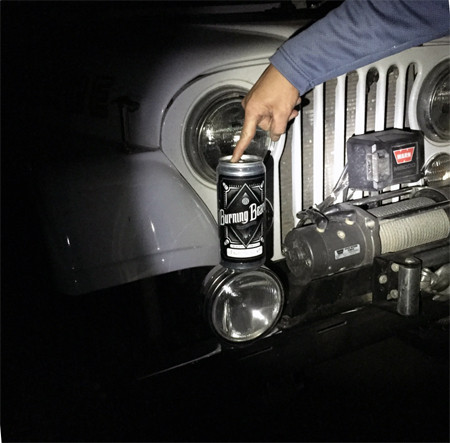 The Garage Hour goons – .45 Phil, Chef Jeff, Kurtis Who Shall Be Named, and Troy from Powder1 – join Hostus Maximus Justin Fort in his chat with Mike and Jeff, the East County originals behind Burning Beard Brewing. They talk beer recipes, the great beer-drinkin’ neighbors in Burning Beard’s vicinity, smoking meat and the best beers for cooking, and FNG Kurtis does a great job acting like a professional broadcaster, conversating with Mike and Jeff about some details of San Diego’s beer-sipping universe. Special thanks to Helix Brewing in La Mesa, which has become an official sponsor of the show, and is kind enough to back our adventures in the endless brewing scene in San Diego..

Following the quick learning curve for Mike and Jeff, the Garage Hour names their next two beers – “German Fairy Chair” and “Pleasure Trawler” – and then Troy from Powder 1 poured beer on our laptop.  Hey, it’s a risky business.

Tune in for all about beer, Burning Beard’s enemies list, putting NRA stickers on unsuspecting hybrids, the killer jukebox load at the ‘Beard, and why Jeff loves the hipsters.

Check out the podcast here: http://bit.ly/1YozjUl