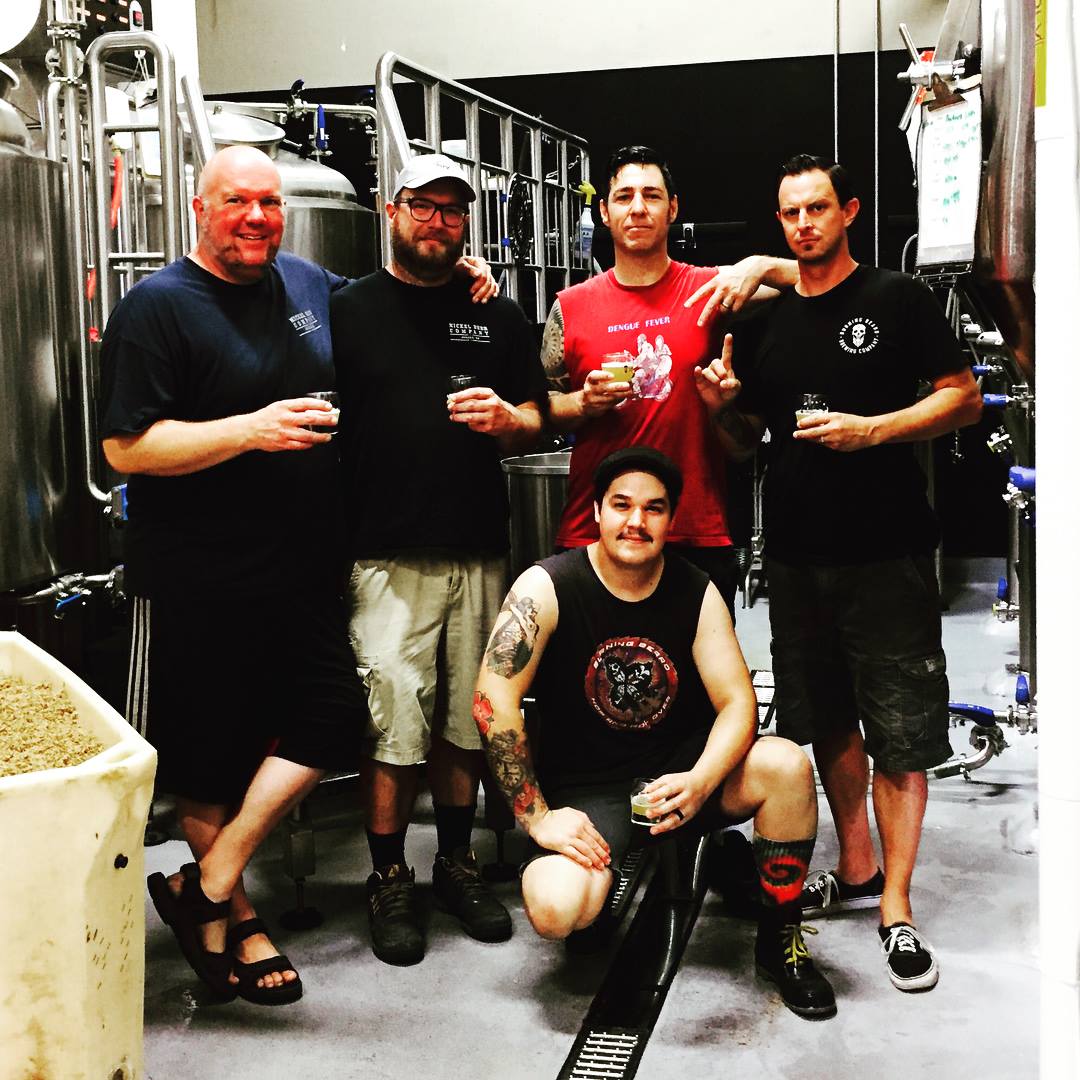 A multidimensional blog post in which it is so hot we travel back in time, get inside Jeff’s head, learn how a wet-hopped beer recipe is formulated, and discover the most important thing on brew day is the sound track.

This Is the Prologue

On this day, September 1st 2017, perhaps the hottest day on Earth, or maybe just in El Cajon … well, definitely the hottest day on the brew stand, we at Burning Beard were graced by the presence of the god-father of Wet Hops, Tom Nickel, and we made a beer. This is the story of how it all came together.

The reluctant protagonist: You are sitting at the bar. Alone. Chicken wings in face. Fall’s wet-hopped beer in hand.

Action: Scot orders a flight. You see them pour a Burning Beard Circle of Wet Hops. It is third in his flight.

Cut to Chicken wings. Wipe mouth with the back of the hand. Sip beer. Notice the BBQ sauce left on the glass looks a bit like lipstick. Laugh to yourself. Scan the room, hoping no one saw you laughing at yourself. Catch the villain outside talking to some hippie sitting at the table next to him. He gestures at the beers. You know what you have to do.

Set your course for the villainous lair (Scot’s table).

First table on the right.

Introduce yourself. Be direct. Villains are like sharks; they can smell fear, weakness, diacetyl.

Villainous Ploy: He invites you to sit. Beware.

As you take a seat Tom Nickel sits at the same table. Red-cheeked.

“Blair, I ordered us some food.” Later you guess that the red cheeks are probably from all of the Scorpion cheese that he has been eating.

Drifting. You are wary. These guys know a lot about beer and villains have a way of drawing one in before they strike. You have the internet. You’ve read about the megalomania. And the opinions. So, many opinions. But this seems different; could the internet have been wrong? You check back into reality. You are sitting at a table with Tom Nickel and Scot Blair. Listening to Tom talk about the maybe six or eight wet-hopped beers he had made this year.

You take a moment to reflect. Five minutes ago, you were sitting at a bar having BBQ lipstick trans-sexual fantasies – now (you scan the table) you are sitting at a table with Scot Blair, Tom Nickel, Scorpion cheese sauce, Scorpion cheese burgers, Nickel’s Scorpion beer, and several glasses of wet-hopped Circle of Hops. This is kind of awesome.

The conversation turns toward the Circle of Wet Hops. Scot and Tom really seem to like it. You don’t know if you should buy into their enthusiasm. After all, who tells the truth to anyone’s face in this industry. It is just polite to wait until the brewer in question leaves the area before you admit how shitty your peers’ beer is right? Later you remember that this truth-telling is Scot’s superpower and that Tom is like the Santa Claus of brewing – the term jolly is reserved solely as a compliment for Tom and Santa.

But this isn’t later yet, and you are a gentleman, so you plan a trip to the restroom to give them a proper chance to talk some shit about Circle of Wet Hops. Once the truth is out, you figure it will be evident on their faces. You return, but that version of the truth it isn’t there. If anything, their enthusiasm about the beer has increased. In fact, Tom is so into the Circle of Hops that he mentions doing a collaboration. Imposter syndrome kicks in. You remember, you are just a homebrewer, that happens to own a brewery. You reluctantly agree to the collab, you can’t say no. Who says no to Tom Nickel? You down another Circle of Wet Hops knowing you have been cornered by this jolly, scorpion-cheese eating mother.

You feel fortunate that almost a year goes by and you and Tom still can’t find a time to connect.

A year of text and email tag ends at the twilight of the 2107 wet-hop season.  Star-B has Neomexicanus and you and Tom have an open date.

It is time to brew. The curtain drops.

The beer gods decided this recipe. We went to the land of misfit grain, where pallets of left-over grain and grain from batches yet-to-be-brewed have accumulated.

We had pilsner, wheat, and a ton of specialty malt.

We used all of the Pilsner we had on hand and all of the wheat – both malted and flaked. We added one bag of caramel 10 for a little depth.

We had Cal Ale and Kolsch yeast working in a few of our fermenters. We opted for the Kolsch yeast, thinking that the subtle Kolsch flavor profile would be both clean and interesting.

Tom’s role was Boss of the wet hops. He and Eric from Star-B met regularly to determine what hops would be ready on our scheduled brew day. Tom settled on Neomexicanus. We planned to do a Circle of Wet Hops dosing – approximately 100 pounds of wet hops for a 15 BBL batch.