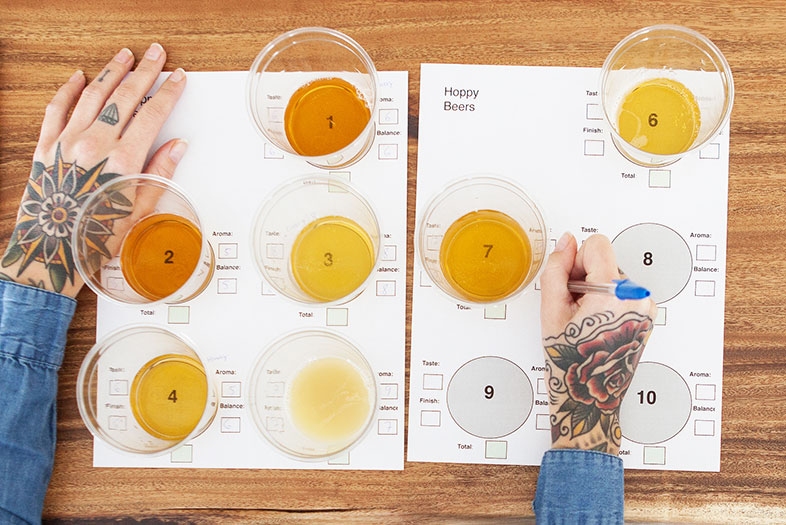 We invited everyone from the top 10 new breweries list** to submit beers for a blind tasting. A total of 34 different beers were received and sorted into four categories: Hoppy, Belgian-Inspired, Malty, and Freestyle. The judges scored each beer from 1 to 10 in four areas: aroma, taste, finish, and overall balance—so a beer with 200 points got flawless marks in all four, from all five judges. Hats off and bottoms up to the winners. **Groundswell did not participate

Gold Medal: Hopmata IPA (Burning Beard). Perfectly balanced with big, satisfying hop aromas, this beer was an immediate favorite for all the judges. It was also the second highest overall scorer of the day. 150 points

Gold Medal: Golden Kiss (Resident). One of the most beautifully balanced and satisfying beers of the day, this saison/farmhouse-style ale had all the toasty, spicy, and tropical notes you want in a crisp, easy-drinking beer style. It was also the highest scorer of the competition. 155 points

Wow, delicious! I like my Belgians with a little more conditioning, and this one starts off really nice and ends really crisp.
—David Martin on Golden Kiss

Gold Medal: Banksy ESB (Burning Beard). Lightly golden, this beer shone with its balance of full-flavored malty caramel and toast, all hung on a frame of crisp, subtle bitterness. In a field filled with deep, dark malt monsters, this beer was a bit of an outsider but more than held its own. 129 points

This beer is one of the kids that’s doing its own thing. It doesn’t seem like it belongs in this category, but I totally understand it.
—Troy Johnson on Banksy ESB

Give me a couple of pints of this radler to drink all day long by the pool.
—Bruce Glassman on Glitz & Glam Pink Lemonade Radler