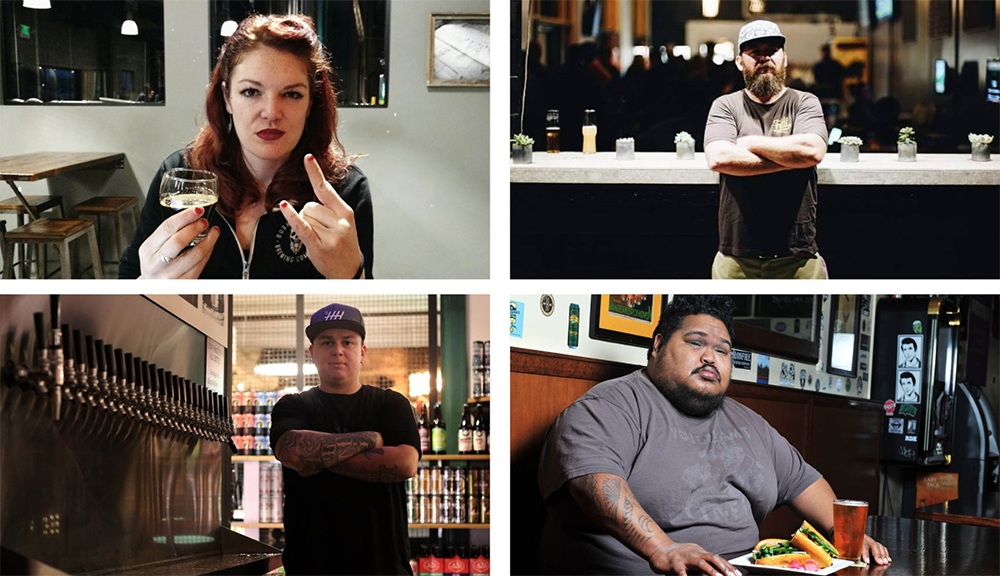 With around 200 breweries and tasting rooms in San Diego county, selecting a favorite beertender is like picking a favorite beer (read: nearly impossible). Some are as much a part of the local craft beer scene as the breweries themselves, while some blaze onto the scene with verve and personality, capturing hearts and grins along the way.

The members of Facebook group Eating and Drinking San Diego banded together and formed an impressive power list of favorite beertenders in the county, with the top vote awarded to Nate Soroko of Toronado and Modern Times, followed by Tony Raso of Bar Sin Nombre, Lance Regenold of Bottlecraft Liberty Station and Shannon Lynette of Burning Beard.

What is it about these four that stood out for beer lovers? From the looks of comments, it was personality, making time for service and knowing what the customer wants. One voter proclaimed, “Lance (Regenold) kills it on the weekend at Bottlecraft. Dude goes non-stop but always has times to give solid recs.” According to another, “Tony (Raso) knows what I want each and every time — a stout in a chalice.”

One EDSD commenter proclaimed of top contenders and winner Nate Soroko, “Everyone on this list are the bees knees. That Nate Soroko tho (sic) … he’s the cats pajamas!”

PACIFIC caught up with all four beertenders to find out more, including a few of their own favorite bartenders, and of course, beers.

How long have you been bartending?

LANCE: I worked in fine dining the last 10 years before Bottlecraft. I’ve been there two years, so technically this is my first bartending job.

NATE: Eight years at Toronado and four years at Modern Times since it opened.

TONY: I started bartending at La Bella Pizza in Chula Vista in 1997.

Are you from San Diego?

LANCE: I was lucky enough to be born and raised in San Diego.

SHANNON: I hail from the arid and sage laden deserts of New Mexico, but specifically moved here from the unyielding and looming mountains of Colorado.

TONY: I’ve lived in Chula Vista since I (first) came home from the hospital.

LANCE: Well, I’d have to say the people. I’ve met some of the coolest, most generous human beings working in this industry. They really make my job too easy. I’m truly blessed to be where I am, surrounded by folks who love craft beer as much as I do.

NATE: It’s amazing that San Diego is such a beer town. People are responsive to good beer.

SHANNON: I know it sounds trite, but resoundingly the customer base. With the saturation of reputable options, even the most inexperienced customer still knows something about craft beer and is possessed with measurable curiosity and standard for it.

TONY: The guests. The community is mostly laid back, friendly and very good at taking care of the bartenders.

LANCE: I love my West Coast and New England IPAs, also barrel aged sours and stouts. My fridge is usually full of whatever new IPAs Modern Times, Mikkeller SD and Pure Project puts out. Some of my favorite beers include Societe’s The Pupil, Russian River’s Blind Pig, and Cellarmaker’s Double Mt. Nelson.

SHANNON: Brevity is the only challenge to this query. I pine for good ESBs. I’ll never turn down an Orval. Blind Pig is my safety blanket IPA. I herald in the fall with marzens and AleSmith’s Evil Dead Red. Societe’s The Widow warms the cockles of my dark heart. There is a time and place for a well-made beer, and that time and place is always.

TONY: My favorite beers are bone dry, low alcohol and full of character. My absolute favorite beer in the world is Taras Boulba (Brasserie de la Senne). We try to always have it on draft at the bar.

What’s one funny/unusual thing about you?

LANCE: Most people trip out on my hair. I have the old hipster comb over fade with a hard part. I also have a rather large hop heart tattoo on my forearm with beer coming out of a tap handle artery. People almost always say something about it when I hand them their beer. One lady who wasn’t really into beer asked me if I was a vegan because I had a huge artichoke tattoo on my arm.

SHANNON: I read good. I ‘m also indignant about the whole “wearing pants in public” thing.

TONY: All of my co-workers hate my jokes. They are corny, dry and stereotypical dad jokes. They get me through the day, but seem to prolong it for my co-workers. They deal with it, but not because they want to.

And finally, who is your favorite bartender?

SHANNON: Any with the audacity to exist past the planes of capitalistic gain to breathe life into the narrative and connectivity that beer proffers the bleary and heavy soul. You do this not for the lining of your tip jar, but because you breathe it. I’m fortunate to know an exhaustive list of individuals that share this as their default, and for that I’m immeasurably grateful.

TONY: Crystal Sexton and Melissa Monteverde. They run Bar Sin Nombre with such precision. They are very fast, extremely attentive and beyond friendly. They make my job so easy.