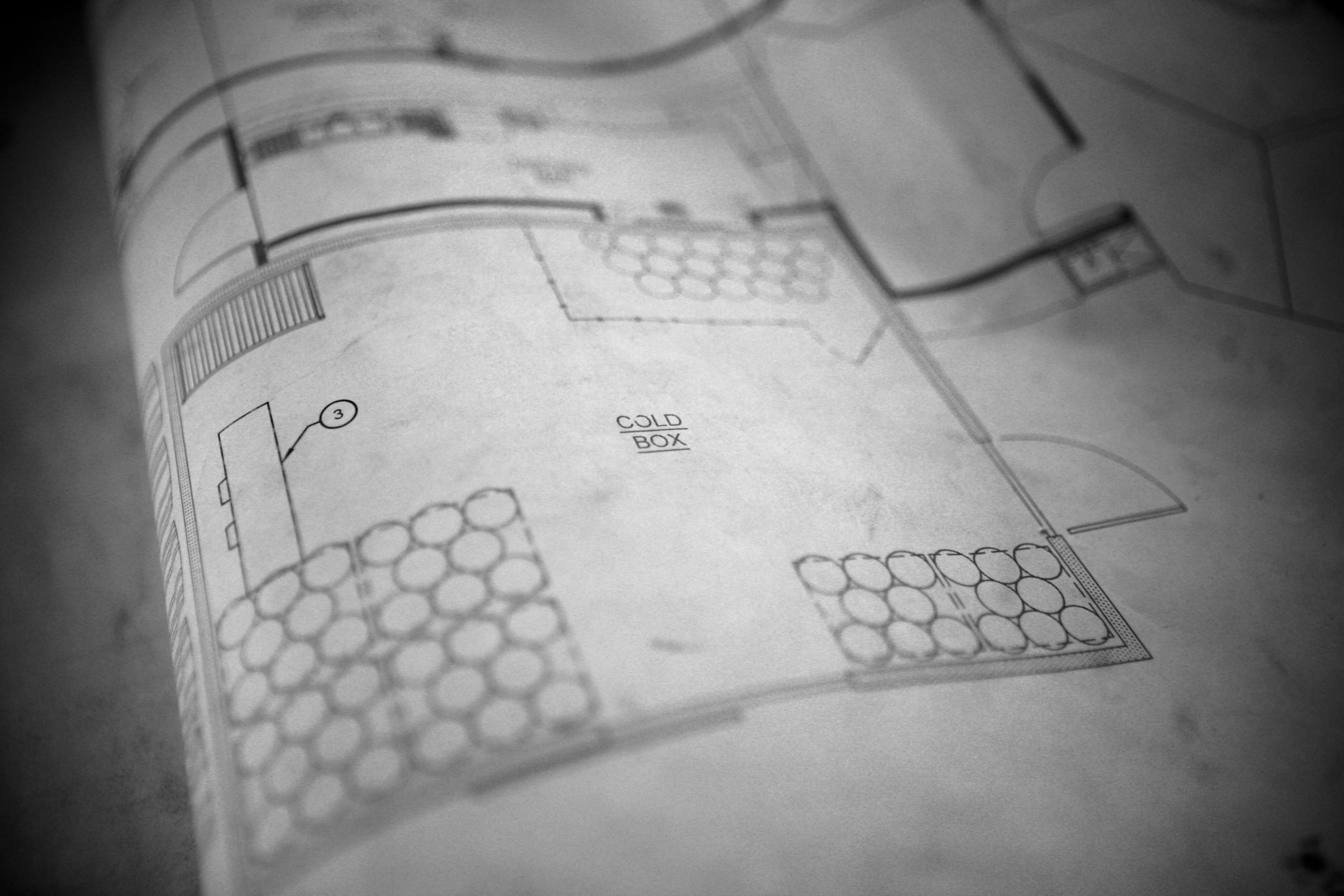 They were already late.  Not a big deal.  We included a month of buffer between when we thought permits would be granted and when we planned on starting construction.  So, completely redrawing the plans on the day that we were planning to submit them shouldn’t be that big a set-back, it feels like it is, but everyone tells me not to worry.

Why redraw the plans?  Inexperience.  Had I done this before – opened a brewery anywhere, perhaps I would have thought more about the brew house size to fermenter ratio.  We were planning a 10bbl brew house with 30bbl fermenters.  After talking with our head brewer, he convinced us to go with a 15bbl brew house.  He was very excited about the prospect of filling the fermenters in two batches rather than three.

Redraw: in the name of efficiency.

So, we submit a week late right?  Not a big deal.  Redraw number one, complete.  Off to the city.  But upon our attempt to submit the plans we encountered another setback.  They wouldn’t take them!

It seems that El Cajon interprets the 15% rule differently than all of the other jurisdictions in San Diego.

We thought we were at 14.4% of our manufacturing space.  Our architect, Dustin, drew up the tap room as he would for all of the other projects he has done in San Diego (and there are many), but El Cajon threw us a curve ball.  All other jurisdictions in San Diego measure the space from the door way up to the bar, El Cajon measures everything from the doorway to behind the bar (right up to the cold box).

Everything is depending on our plans.  Our equipment loan won’t fund until we have the tenant improvement permits.  So, how have you been getting anything done without the loan you ask?  Mike and I have been paying cash, our life savings cash.  Rainy day fund, vacation fund (what’s that), college fund, retirement accounts, loans from 401K’s cash.  And the money is flying out at alarming rates.  As my friend Neil Lotz from Desert Distilling told me, “for some reason, everything seems to cost at least $5,000.”  That is no lie.

Dustin (our architect) knows that we need these permits to fund everything.  I have made him painfully aware of our need for the permit process to go smoothly (sorry Dustin).  And upon attempting to submit the plans he was stonewalled.  They wouldn’t even take them for a review.  Why?  The 15%.

So, I email the city.  Called the city council.  Called the planning department.  Called the mayor.  The only one that answered that day was the mayor.  Bill Wells.  He was nice enough to listen and I am not sure if he spoke with anyone in planning, but I eventually got an email from the head of planning who took this 15% issue to the city attorney.  He said that a change in the interpretation of this rule would require a change in policy.  Whatever the case, this was not happening this week or month for that matter.

Back to the drawing board.  Again.

We spoke with the planning department on how to redesign the space to maximize our square-footage.  Dustin had the plans redrawn in a day and then he sent them out to the mechanical engineers so that they could make all of their changes.  Everything was done in record time and a day and a half later Dustin took that plans back to the city.  And once again, he was stone walled.

Gut punch.  This could cost us a lot of money.  We rushed Dustin and all of the mechanical engineers and now we have to do it all again.  I can feel all of the good will we have built up with these people seeping out.  Hurry AGAIN?  Would we be able to pull off another 32 hour design miracle? And I keep thinking that we might owe Dustin money for his time on the last redraw.  I never asked him.  I just wanted it done.  I don’t want to know.

My internal dialog turns dark.  I have watched Fight Club too many times.

They wanted us to radically modify our ever-shrinking tap room.  The requested changes seemed crazy to me – especially knowing that we followed the directions given to us by the city after the last rejection.  I could be wrong, but it seemed like the plans were rejected for weird aesthetic reasons.  Like, “I think it would be nice if these walls lined up with each other kind of reasons.”  *Shrink* And “I am not sure that this 42” wall defines the space well enough.  You need a full wall here.  Bring this one in.” *Shrink*

Look I understand, people do crazy things after a night of drinking in a tap room, but a 42” wall is no Les Nessman attempt at wall demarcation.  It is a WALL.

This time I only had to make one phone call.  Speed dial.  Mayor Wells answered again.  I tried to keep my cool while giving him all of the details, but I was losing it on the inside.  He told me that he really wants us in El Cajon and that he just happens to be headed to the building department.  He said he’d call me back if he couldn’t get anything done for us.

I didn’t get a call back, but I did get a call from Dustin.  They approved our plans.  Why the about-face?  They tell us that they would have accepted the last plans had we labeled the space properly.  OK.

We labeled the space and Dustin took the plans in for the third time.