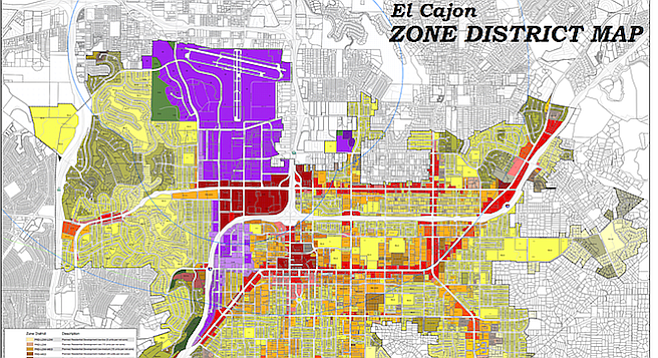 For a moment there, the El Cajon was on the verge of having three breweries. But last week, incoming Knox Corners Brewing announced via Facebook it had ended its efforts to open in El Cajon, instead securing a property in nearby Lakeside. Then news broke this week that URBN St. Brewing was ceasing brewing operations at its pizza restaurant in downtown El Cajon. That leaves just one, Burning Beard Brewing Co., currently aiming for a late-winter start.

Like its East County neighbor La Mesa, and South Bay city Chula Vista, the City of El Cajon has been working to change local ordinances to allow breweries to operate. La Mesa amended its city charter, while Chula is increasingly willing to offer conditional use permits on a brewery-by-brewery basis.

Knox Brewing successfully lobbied El Cajon to change ordinances to allow breweries with a tasting room to forego the conditional use permit requirement.

“We worked together for the better part of 2014 to amend the City Ordinance that prohibited a brewery from opening a tasting room within El Cajon City limits,” reads the Knox Facebook announcement. “In December 2014, our partnership with the City was somewhat successful.” However, it continues, “Regulations on square footage and location would not work in our situation.”

This may refer to the stipulation that, while a brewery may operate a tasting room, it cannot exceed 15 percent of the brewery’s total square footage; that’s strictly within El Cajon’s manufacturing zone in the city’s northwest sector — east of Cuyamaca and north of Fletcher Parkway.

Outside that zone, a conditional permit is still required. URBN St. had operated at its central downtown location on a conditional use permit, as did its predecessor at that location, El Cajon Brewing.

Melissa Devine, a senior planner for the city, says future businesses attempting to do this should have an easier time receiving one as a result of Knox Brewing’s efforts, as the revised ordinances, as of February 2015, “also solidified the process of a brewery with a restaurant to be allowed in our commercial zones with a [conditional use permit].”

However, while both sides seemed committed to bringing Knox to El Cajon, the prolonged effort required ultimately doomed the partnership. A representative of the future Lakeside beer company commented, “The time and money we have spent has put us into a different startup situation.”

“We certainly wanted to have them,” says Anthony Shute, deputy director of community development for El Cajon. “We certainly want to attract more brewers into the city.” In fact, he adds, “Anybody can produce any kind of alcoholic beverage out there.”

In the near term, only Burning Beard (previously known as Promethean Brewing) has concrete plans to do so. Co-founder Mike Maass says, “We’ve always held that El Cajon is an underserved market, and we plan to change that.”

Meanwhile, amid reports URBN St. closed for financial considerations, ownership issued the statement, “URBN Restaurants has made the decision to focus efforts in 2016 on growing the URBN Coal Fired Pizza division.”