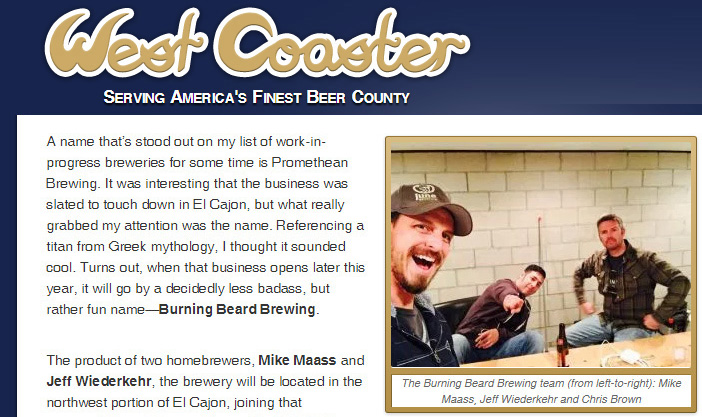 A name that’s stood out on my list of work-in-progress breweries for some time is Promethean Brewing. It was interesting that the business was slated to touch down in El Cajon, but what really grabbed my attention was the name. Referencing a titan from Greek mythology, I thought it sounded cool. Turns out, when that business opens later this year, it will go by a decidedly less badass, but rather fun name—Burning Beard Brewing.

The product of two homebrewers, Mike Maass andJeff Wiederkehr, the brewery will be located in the northwest portion of El Cajon, joining that community’s sole beermaking entity, URBN St. Brewing Co. Maass was introduced to brewing on his first visit to Home Brew Mart the year it opened. Wiederkehr came to the science of fermentation in 2012, but his immersion has since been deep and constant. Shortly after falling in love with brewing, he and Maass had a life-changing conversation over beers at Small Bar that led them to try to be productive members of San Diego County’s proud brewing scene.

From the beginning, being an asset rather than a liability has been tops on their list of pro brewing ambitions. The duo say they realize the lofty reputation local brewers have built for the region and want to respect it by meeting established quality standards. They know it won’t be easy, but will be helped out in that area by director of brewing operations Chris Brown. He has spent the past five years working as a brewing consultant for Urban Construction Management Group and brewing at Iron Fist Brewing Co., Rough Draft Brewing Co. and Butcher’s Brewing Co., where he served as head brewer.

Brown and company cite a deep passion for San Diego’s highly-hopped pale ales and IPAs, and plan on brewing those along with various other beers that figure to benefit from the hoppy, flavorful influence of the local brewhouse terroir. The projected opening day line-up includes a hoppy IPA, Belgian-style abbey ale, imperial stout, coffee milk stout and either a Helles or Dortmunder lager. Those will be produced on a 15-barrel system matched with 30-barrel fermenters, but Burning Beard is also equipped with foudres and plans to establish a wild ale program.

The Burning Beard team expects the brewery to be open and serving beer come mid-December, but says that could happen as early as November. Once open, beers will be available in the tasting room (and available to-go via can-growlers) and kegged for off-site accounts, with some sours eventually making their way into 750-milliliter bottles. Burning Beard’s annual capacity will be 2,700 barrels per year, but if they sell half that much in Year One, they’ll count that as a big win.