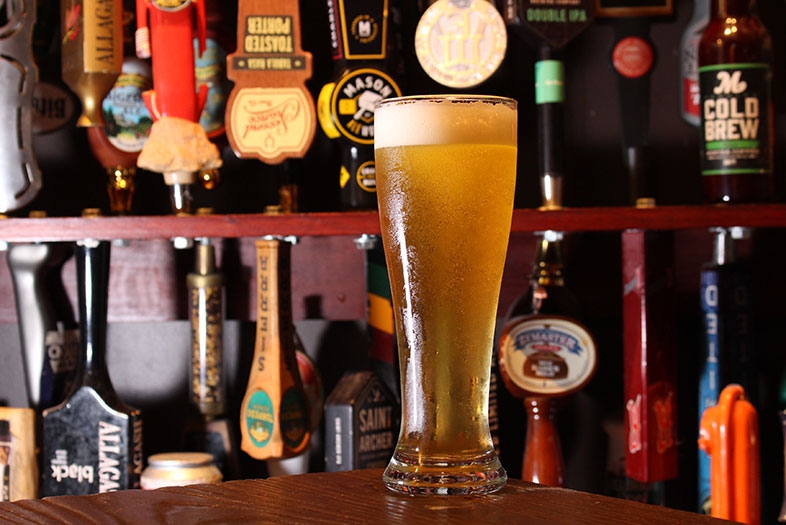 What San Diego is Drinking Right Now
Some surprising—and some not so surprising—current local beer trends
San Diego Magazine, Jan. 19, 2017
By Bruce Glassman

Do you ever wonder what the San Diego beer scene looks like from behind the bar? I do. I spend so much time writing about—and thinking about—new trends, styles, and techniques that I don’t often get a chance to step back and get the 10,000-foot view of what our beer community looks like as a group. In fact, I’m really not the one who’s equipped to do that, but the owners and managers of our most popular pubs and bars are. These are the people who are truly on the front lines—they take the drink orders, answer the questions, and hear what people are saying about beer and breweries. They’re the people who know which kegs blow in a few hours and which take a week or more.

For this overview, I went to a group of my most-trusted publicans with a list of questions about what drinking patterns and preferences they see in their bars on a daily basis. Tyson Blake, General Manager of O’Brien’s in Clairemont Mesa, provided insights from one of San Diego’s oldest and most-respected craft beer establishments. Scot Blair—owner of Hamilton’s, Monkey Paw Pub & Brewery, and South Park Brewing—offered the unique triple perspective of a publican, a brewer, and an owner of some of the most popular craft beer locations in the county. Sara Berge and Patrick Cusick, both managers for the super-popular Urge Gastropubs (Rancho Bernardo and Oceanside), shared the observations they’ve made from inside North County’s fastest-growing craft-centric restaurant group.

So what did I glean from all this collective beer knowledge? Here are some of the questions I posed, along with a summary of the answers I got from my special group of experts.

What’s the most popular style of beer in San Diego?

This question may seem obvious to most people, but it’s worth asking just for confirmation and clarity. Yes, it’s IPA and Double IPA, but that’s not the real story. The interesting part of this response was the style that came in second across the board: Pilsner. This is a style that was hugely popular twenty years ago and was then largely ignored for many years. Its resurgence, particularly in a town as hop-crazed as San Diego, is especially interesting. Sara Berge, who is also the beer buyer for Urge, says, “What’s interesting right now is that—out in Oceanside particularly—I can’t keep enough lagers, especially Pilsners, on draft.” What are some of the most popular Pilsners and lagers? Sara mentioned Thorn St. Barrio Mexican Lager, and Patrick Cusick mentioned Modern Times Ice Czech Pils and Societe’s Heiress. Sara thinks the newfound love for Pilsners stems from the basic desire among beer drinkers to find beers that offer satisfying flavor without being too heavy on the alcohol. Even the IPA lovers, she says, are “appreciating the complexity of a good lager” and seem to feel it’s “more acceptable” to order a lager these days. She has also seen that these drinkers will often mix up their evening’s selections and include some of both styles in the same sitting. A town that loves Double IPAs and Pilsners—talk about opposites attracting!

What’s the most popular beer in San Diego?

Given the dominance of the IPA and Double IPA, it wasn’t a surprise to hear that Pliny the Elder from Russian River is consistently the best-selling beer in town—this was true for O’Brien’s as well as Hamilton’s and Urge (though they only offer Pliny at Urge RB, where a keg tends to blow in less than 10 hours). When asked for the most popular local stars that come close to rivaling the popularity of Pliny, Sara said, “The Pupil from Societe. It’s a delicious beer and we can always sell that, no problem.” Patrick agreed that, “any IPA from Societe, whether it’s Apprentice or Publican or Pupil, those will fly out the door.” Both Scot Blair and Tyson Blake said Burning Beard beers are a top choice of their customers (Tyson says that Burning Beard’s Hopmata IPA is one of his best sellers, along with Societe’s Pupil IPA).

Which is the most popular brewery right now?

Okay, here we need a sort of disclaimer. The answer, first and foremost, from all concerned was Russian River, which (again) is no surprise. Russian River and Pliny (Elder and Younger) IPA are probably the most consistently sought after beers in the country, so hands in the air; no contest there. However, the other breweries mentioned in the same breath were—again—the more interesting story. Both Tyson and Scot named El Cajon’s Burning Beard as one of their “hottest” breweries right now, along with Clairemont Mesa’s Societe, which Sara also listed as “always one of our number-one sellers.” Patrick added that Pure Project has been really hot lately as well, with a string of great beers (yes, notably IPAs) that have captured the fancy of the local beer-drinking community.

What’s the most intriguing trend among craft beer drinkers today?

This one was quite interesting, not only because all my experts named the same trend—hazy beers, also known as turbid beers and New England-style beers—but also because the trend has obviously caused something of a rift among the craft beer faithful. Scot is an outspoken critic of the hazy beer movement. He feels that the craze has been borne of a lack of respect for tradition and history: “The hazy beer craze has me personally baffled,” Blair says. “To think the uglier a beer looks the cooler it is—it’s like a hipster in an ugly sweater and mismatched socks. It just doesn’t make sense. They taste good but they look like shit.” Tyson has bit more of a forgiving take on the trend. He says the New England style IPA is a style that “you either love or hate.” He goes on to say that “many are not done all that well,” but he has found some exceptions. “We have really enjoyed Pure Project’s Murklands IPA and Half Door did a killer job with their NE IPA.”

Patrick and Sara also remarked on the explosion in demand for fruited beers, which seemed to really pick up steam last summer, around July, even though Patrick thinks the very beginning can be traced to the massive popularity of Ballast Point’s Grapefruit Sculpin, which was followed by Pineapple Sculpin and other fruited varieties. Sara says that, “You can put a fruit in any style beer—whether it be a stout or a porter with cherries or raspberries, or fruit in any IPA, anything you put fruit in, people are automatically going to become attracted to that. If we have an IPA on the menu with any kind of fruit, it’s always the first one that goes.” Patrick agrees, and says, “You put a fruit in front of any IPA and, forget about it, it’s out the door. It doesn’t matter. If people see mango, passion fruit, guava, that’s it.”

What’s been the biggest change in the beer scene during the past five years?

Tyson thinks the burgeoning interest in sours is the biggest change he’s seen in the past years, and Sara and Patrick agree. Not only are more breweries doing these beers (both kettle sours and barrel-aged sours), but more customers are asking for them and experimenting with a larger variety of styles. Sara remarked that fruited sours have also become a very popular way to entice drinkers to try the style. She says that a regular Gose on a menu will usually not attract much interest, but a grapefruit or apricot Gose will be instantly popular.

No matter who I spoke to, all agreed that San Diego is a serious craft beer town, with serious drinkers who know their stuff. Tyson feels that customers these days are much more knowledgeable about beer styles than they have ever been, and Sara has also noticed that the general consumer is really well educated about beer; they know what to ask for and they know what to expect from a wide variety of styles. “In San Diego, we’re so spoiled and we have access to such amazing beer,” Sara says, “and everyone knows what they’re drinking. People are also generally much more adventurous than they used to be. They’ll see new styles on the menu and they’ll want to try them.” With so much awesome beer to choose from, most San Diegans seem to know that—whatever they order—what will wind up in their glass is bound to taste great.