Why Beer Festivals Are Awesome

Why Beer Festivals Are Awesome 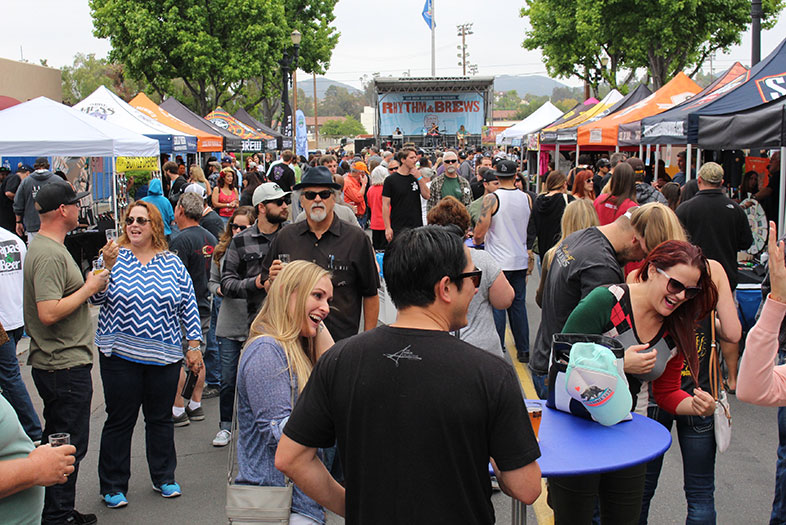 Why Beer Festivals Are Awesome
Power-sipping our way through a smorgasbord of San Diego brews
San Diego Magazine, May 19, 2016
By Bruce Glassman

Live music. Dozens of breweries. More than 100 beers to taste. These are the makings of a fine afternoon.

This past Saturday, the 5th Annual Rhythm & Brews Festival offered craft beer fans a special venue in which to sip, sample, and explore beers by brewers from across the county. Staged in Vista and sponsored by the San Diego Brewers Guild, the festival featured breweries both large and small, established and new, well known and relatively obscure. What makes a festival like this one especially gratifying is the opportunity to really focus on tasting, to experience as many different flavors and styles as possible, and to be able to do it just a few ounces at a time.A couple of things become very clear when you hop from booth to booth, sampling the wares of each brewery as you go.

First observation: It helps a great deal to have at least one companion with you, so you can share tastes and effectively double the number of beers you can try. Sometimes the most battle-hardened tasters (including myself) tend to forget that— even though those cute little plastic glasses are small—when you fill them 10, 15, 20 times, you’re talking some serious quantity.

Second observation: We’ve got a lot of IPAs in this town. The sheer number of IPAs is, in itself, impressive, but so is the variety of recipes within this uber-popular style. Tasting so many IPAs side by side really brings home how different hop varieties create vastly different aromas and flavors in the finished product. And having all these IPAs in one place also highlights the many approaches one can take in formulating this style of beer. Some San Diego brewers prefer to put the big citrus and tropical character of certain hops front and center. Others prefer to feature aromas of pine and fresh-cut grass. Still others like a more malty approach, balancing honey and caramel notes with moderate hop bitterness. No matter what the recipe, it’s clear that IPAs are the one style our brewers feel they cannot do without (and the beer-drinking public agrees!).

Third observation: There’s a lot of innovation going on in San Diego. It was striking, as we made our way up and down the aisles, that—despite all the IPAs available—lots of brewers were also offering some less-established, more “offbeat” styles, such as goses, commons, dunkelweizens, and various riffs on fruit beers. Those types of beers are not only quenching, they provide a welcome respite for the palate—especially when you’ve spent the afternoon downing dozens of big, bold, and bitter ales.

By the time my afternoon at the festival was done, I had probably tasted between 40-50 beers (not full tastes of all!) and had compiled a list of what I considered to be the event’s standouts. Here, in no particular order, are my picks for the beers that shined the brightest in Vista:

If you didn’t have the chance to sample these great beers at the festival, you can probably find them at each brewery’s tasting room. Some of them are regulars on the tap list, and most of them will probably be available at least for a short while—brewed for the festival, but likely to be guzzled down by a thirsty and appreciative public in no time at all.